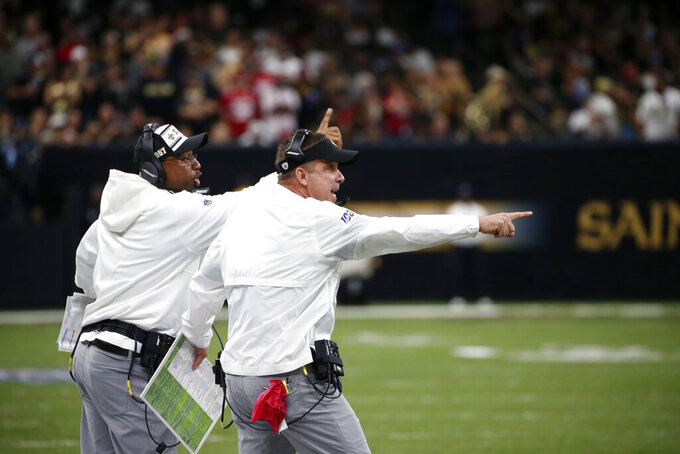 New Orleans Saints head coach Sean Payton calls out from the sideline in the first half an NFL football game against the San Francisco 49ers in New Orleans, Sunday, Dec. 8, 2019. (AP Photo/Butch Dill)

NEW ORLEANS (AP) — The New Orleans Saints sought to gain an edge on the San Francisco 49ers by making aggressive decisions and digging deep into the playbook.

An inability to convert a 2-point conversion attempt in the first quarter, or a fake punt late in the third, came back to haunt the Saints in a dramatic 48-46 loss on Sunday. Yet quarterback Drew Brees said the Saints wouldn't have changed their aggressive mindset if they had it to do again.

“You know you’re in that type of game, right? And we were going to play aggressive," Brees said. "We’re going to take chances. We’re not going to make any excuses.”

Turns out, it was the 49ers who took advantage of the Saints' inability to execute those plays — and even countered with some tricks of their own.

After San Francisco’s Ahkello Witherspoon was penalized for unnecessary roughness for hitting Saints’ Jared Cook in the head on the tight end’s 26-yard touchdown catch in the first quarter, Payton went for 2 from the 1-yard line instead of the extra point.

The conversion attempt failed when Taysom Hill was tackled behind the line of scrimmage.

Making matters worse, Cook was lost for the game with a concussion.

“It would have been nice to have him obviously," Saints quarterback Drew Brees said of Cook, who scored New Orleans' first two TDs. "I felt like he would have had opportunities and been able to complement everything we were doing.”

The biggest gamble for New Orleans came a few series later when, on fourth-and-18 from the San Francisco 45, Payton called for a fake punt.

Hill lined up where punter Thomas Morstead normally would, took the snap and threw deep down the sideline for Tre’Quan Smith. But the 49ers’ Tarvarius Moore was shoving Smith toward the sideline, preventing him from getting the ball, which does not constitute pass interference when the passing team is in apparent punt formation.

“It was just a good play by the defense,” Smith said. “He knew that you can get your hands on them and not have it be pass interference.”

It also didn't help that running back Alvin Kamara, normally one of the Saints' most dynamic and productive players, fumbled in the third quarter at the New Orleans 20. San Francisco’s DeForest Buckner recovered, setting up a Niners TD on a short pass from Jimmy Garoppolo to tight end George Kittle.

And when the 49ers gambled, the Saints were caught out of position.

Receiver Emmanuel Sanders took a lateral on a reverse and pulled up to throw, finding no Saints defender near running back Raheem Mostert, who made the catch and trotted to the end zone for a 35-yard score.

Later, the Niners set up a touchdown with an 18-yard gain on a play that began with a hand-off to Kyle Juszczyk, who then delivered an option pitch to Mostert.

“You decide on how many risky calls you want to keep doing based on how your defense is playing,” San Francisco coach Kyle Shanahan said. “But we knew we were going to come out early with that stuff, and their offense was scoring a lot, so we never felt like we should slow down with it.”

By the time the Saints had clawed back to take a 46-45 lead on Brees' 18-yard touchdown pass with 53 seconds left, they needed to try another 2-point conversion for a three-point lead.

Brees' pass fell incomplete, and shortly after, New Orleans' defense allowed Kittle's 39-yard gain after his short reception near the left sideline on fourth-and-2. A facemask penalty by safety Marcus Williams meant the Niners netted 53 yards on the play.

Robbie Gould connected on a 30-yard field goal soon after and the 49ers (11-2) left New Orleans with a victory that gave them a decisive edge over the Saints (10-3) in the race of top two seed in the NFC playoffs.