Saints agree to terms with QB Winston on one-year contract 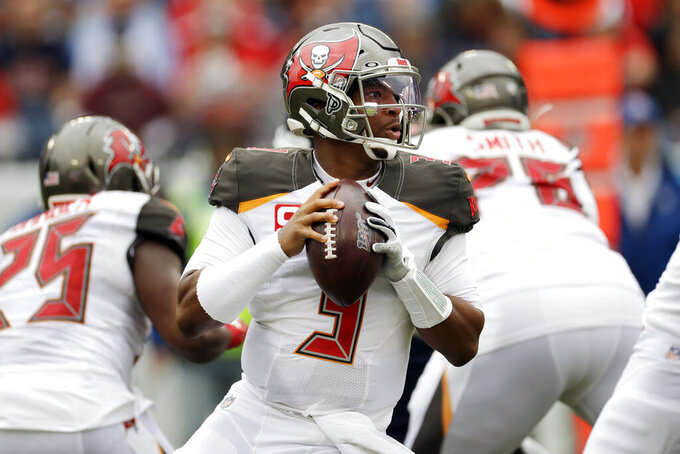 FILE - In this Oct. 27, 2019, file photo, Tampa Bay Buccaneers quarterback Jameis Winston (3) passes against the Tennessee Titans before an NFL football game Sunday, Oct. 27, 2019, in Nashville, Tenn. A person familiar with the situation says the Saints and Winston are working on a contract proposal to make the former Buccaneers starter a backup to Drew Brees in New Orleans. The person said Sunday, April 26, 2020, that the Saints and Winston are in “advanced” talks to get a deal done. The person spoke to The Associated Press on condition of anonymity because negotiations were ongoing. (AP Photo/James Kenney, File)

Winston, the first overall pick in the 2015 draft, will serve as the backup to Drew Brees.

Winston is coming off a season in which he led the NFL with 5,109 yards passing and ranked second with 33 touchdown passes, but he also led the NFL in interceptions with 30. That made Winston the first QB in NFL history to have at least 30 TDs and 30 interceptions. Tampa Bay allowed Winston to enter free agency and replaced him with former Patriots QB Tom Brady.

Winston was a two-year starter at Florida State, where he won the Heisman Trophy and led the Seminoles to a national title as a freshman in the 2013 season.

In five seasons with the Buccaneers, he has passed for 19,737 yards and 121 touchdowns while throwing 88 interceptions. But while he was productive statistically, that didn’t amount to winning. The Bucs went 28-42 in games Winston started.

Winston also became known for making news off the field. He was suspended for the first three games in 2018 after the NFL investigated allegations by a female ride-share service driver that the quarterback made unwanted sexual advances.

The driver never reported the matter to authorities but did notify her employer, Uber.

During college, Winston was accused of raping a fellow student at FSU but was never charged. The university in January 2016 settled a Title IX lawsuit with Winston’s accuser for $1.7 million over its handling of the allegations.

Winston also was implicated in a shoplifting case involving about $33 in crab legs and crawfish.