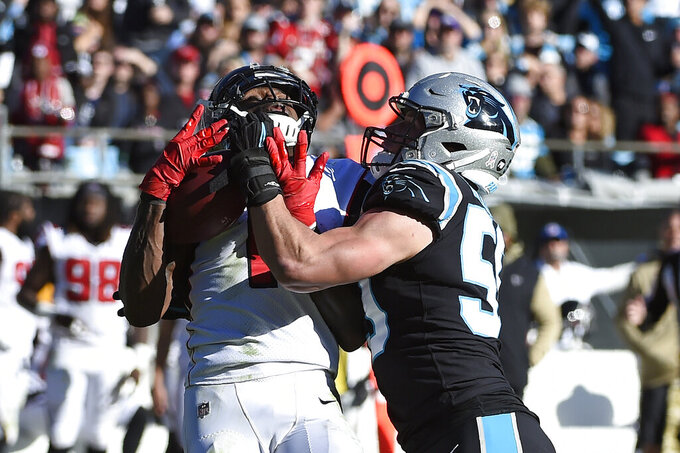 NEW ORLEANS (AP) — Drew Brees and the Saints were reminded two weeks ago that even the last-place team in the NFC South can take them down.

The Panthers (5-5) got the same reminder last week. So Brees could only presume a sense of urgency pervaded Carolina’s preparations for Sunday’s visit to New Orleans (8-2) in a matchup of the top two teams in the division.

“You could say it's very similar to the position we were in coming off (the previous) week, where you lose one at home and you didn't play your best football obviously, and there is a lot at stake,” Brees said, relating the Saints’ home loss to Atlanta in Week 10 to the Panthers’ home loss to the Falcons in Week 11.

“Listen, these are divisional games,” Brees continued. “We're fighting to win the division. They are fighting to be in contention as well. This is one of those games.”

When the Saints offense struggled against the Falcons two weeks ago, a prime factor was the ability of Atlanta’s defensive front to create pressure. Brees was sacked six times and the Saints never got in the end zone.

Now New Orleans faces a Carolina defense that entered this week tied for the NFL lead in sacks with 39, and third in the league in interceptions with 12. Brees suggested that the Panthers’ success in those areas stems in large part from linebacker Luke Kuechly.

“They have obviously one of the smartest, best players in the game — Luke Kuechly — and you see how active he is in his communication and leadership on that side of the ball,” Brees said. “They're doing a good job of getting pressure on opposing teams and taking the ball away. Again, for us, it becomes about our execution, our attention to detail in regards to the protection.”

The Saints are no slouches on defense, either.

Panthers coach Ron Rivera, who was an All-America linebacker at California in the early 1980s before winning a Super Bowl as a player with Chicago Bears, was highly complimentary this week of New Orleans’ defensive front.

“A lot of people talk about certain elements of defensive football, but I've always been one that believes it starts up front,” Rivera said. “When you feel really good about the way those guys are playing, to me, it just kind of permeates throughout the rest of the unit because they feel that and the impact those guys up front make.”

Rivera listed Saints defensive end Cameron Jordan, who has 9 ½ sacks this season and also went to Cal, as one of his favorites to watch when he’s reviewing video of Saints games.

“They've got a good tandem of outside rushers,” Rivera said, referring to Jordan and Marcus Davenport. “They get good push on the inside so guys can't step up, and that's why they've had so much success this year.”

The Saints also rank third against the run, which could prompt the Panthers to lean more on their passing game — one week after quarterback Kyle Allen threw four interceptions against the Falcons.

Allen downplayed the significance of beating the Saints in Week 17 last season at the Superdome in his first NFL start, largely because it was a meaningless game in which coach Sean Payton rested starters in the second half.

“The only thing I can really take from that game is playing in that stadium,” Allen said. “But (this year) is different. It’s a new team and they run a little bit of a different scheme and they have some different players. And there is a lot more on the line.”

A loss to the Saints could be a significant blow to Carolina’s waning playoff hopes. The Panthers enter the weekend three games back of the Saints with six games remaining, and 2 ½ games out of the second wild-card spot.

The Panthers have a chance to make up ground on the Saints because they have to play them twice. Panthers safety Tre Boston said “this is not something that is impossible. But would I say our backs against the wall? I would say yeah.”

The Saints’ top priority on defense will be stopping Christian McCaffrey, first in the league in yards from scrimmage, yards rushing and touchdowns. Sean Payton said simulating for McCaffrey’s speed in practice is extremely challenging, although he hopes his defense is prepared for him after practicing against Alvin Kamara, a similar style back, on a fairly regular basis. Payton says McCaffrey is “playing exceptionally well. You are seeing gains of 30 and 40 yards and his speed gets him into the end zone.”

The Panthers’ first order of business will be protecting Allen on Sunday. The second-year quarterback was sacked five times last week by the Falcons and threw a career-high four interceptions. The problem for the Panthers is the inexperience at left tackle this season, where they have started rookies Dennis Daley and Greg Little.