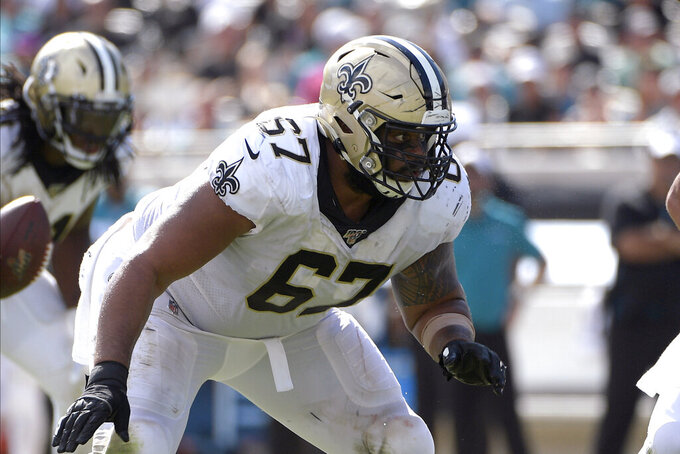 FILE - In this Oct. 13, 2019, file photo, New Orleans Saints' Larry Warford (67) blocks against the Jacksonville Jaguars during the second half of an NFL football game in Jacksonville, Fla. The Saints have cut three-time Pro Bowl right guard Warford, whose three-year run as a starter was cast into doubt by the club's selection of interior lineman Cesar Ruiz in the first round of the recent NFL draft. Warford's termination was announced by general manager Mickey Loomis on Friday, May 8, 2020. (AP Photo/Phelan M. Ebenhack, File)

NEW ORLEANS (AP) — The New Orleans Saints have cut three-time Pro Bowl right guard Larry Warford, whose three-year run as a starter was cast into doubt by the club's selection of interior lineman Cesar Ruiz in the first round of the NFL draft.

Warford, whose termination was announced Friday by general manager Mickey Loomis, started all 44 games in which he played for New Orleans since signing a four-year, $34 million contract in 2017.

But the drafting of Ruiz 24th overall was one of several developments in the past year that made Warford expendable in New Orleans.

In 2019, the Saints used their top overall draft choice in the second round to take Texas A&M center Erik McCoy. Then in March, the Saints signed left guard Andrus Peat to a five-year, $57.5 million extension. And when the Saints drafted Ruiz two weeks ago, coach Sean Payton asserted, “We weren't drafting someone that high to come in and be a backup. ... He was one of the better interior linemen I’ve seen in a while.”

Payton went on to praise both McCoy and Ruiz for their ability to play either center or guard. McCoy started at center as a rookie.

If Warford was not going to start, his base salary of more than $7 million would have been difficult to justify. Now cutting him gives the Saints more room under the NFL's salary cap to address more pressing needs.

Warford posted a goodbye note to Saints fans on a social media account Friday night, writing: “These last 3 years with the Saints have been nothing but a blessing. The team, the city, and the fans have given me an experience I won’t forget. New Orleans is something different. Thank you all for everything!!"

Warford now enters the free agent market as an option for teams looking to profit from his experience starting for a club that has won three-straight NFC South crowns, went 13-3 each of the past two seasons and whose offensive line allowed just 12 sacks of quarterback Drew Brees in the 11 regular-season games Brees played last season.

Warford began his NFL career with Detroit, which made him an early third-round draft choice out of Kentucky in 2013. He started all 57 games he played for the Lions in four seasons before leaving for New Orleans as a free agent.

Warford also has played in six playoff games — five with the Saints.