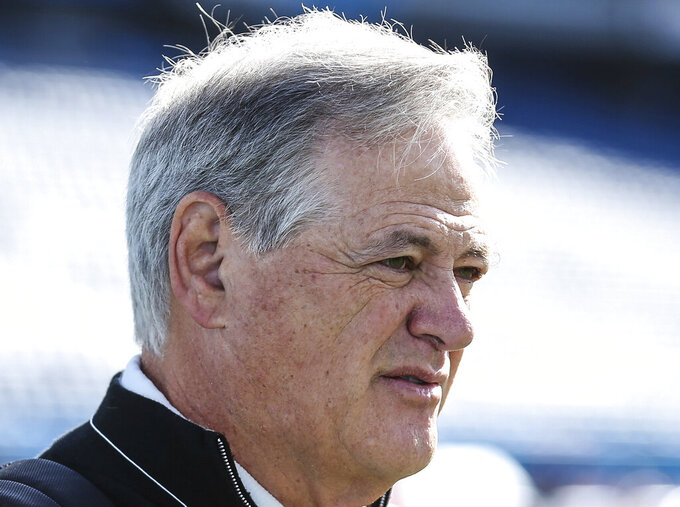 Saints general manager Mickey Loomis said the club remains “in the middle” of its coaching search after interviewing three candidates — including former Miami coach Brian Flores — whom Loomis described as “all very impressive in their own right.”

Loomis also said Flores informed the Saints of his discrimination lawsuit against the NFL after speaking with the club on Tuesday about the coaching vacancy created last week when Sean Payton retired following 16 years in New Orleans.

“He was very impressive and we had a great interview," Loomis, who was in Mobile, Alabama, for the Senior Bowl, said of Flores. “It went well.”

Loomis was less forthcoming regarding particular attributes he liked about Flores.

“Just a lot of things. I don’t want to get into the specifics,” he said.

Flores, who was an assistant on four New England championship teams, was fired after coaching Miami to a 9-8 record this past season, his second straight with a winning record.

The Saints also have interviewed former Philadelphia coach Doug Pederson, who coached the 2017 Eagles to a Super Bowl championship, and Detroit Lions defensive coordinator Aaron Glenn, who was the Saints defensive backs coach for five seasons before leaving to join Dan Campbell, a top Saints assistant before his hiring as Lions head coach.

Campbell, who is in Mobile this week to coach in the Senior Bowl, spoke glowingly about Glenn's credentials.

“I love AG. I do not want to lose AG. That’s how much I think of him and what he’s brought to us and the life that he’s given our defense," Campbell said. "The guy’s going to be a home run as a head coach. He’s passionate. He’s smart. He’s got a good feel of personnel.

Loomis said the Saints also have interviews scheduled with two of their own coordinators: Dennis Allen, who has overseen the Saints' defense since late in the 2015 season, and Darren Rizzi, who has directed New Orleans' special teams units since 2019.

Loomis, who highlighted Allen's credentials last week, did so again on Wednesday.

“First of all, he’s a great coach and he’s been a part of our building for a long time," Loomis said, adding that Allen helped foster the “culture" of the club during the Payton era and was “a big part of the success we’ve had over the years.”

Loomis also noted that Allen has prior head coaching experience. That did not go well, however. He won eight games in his first two seasons with the Oakland Raiders in 2012 and 2013 and was fired in 2014 after an 0-4 start.

As for the timeline for a hiring, Loomis said the Saints intend to be more deliberate than hasty.

“You always want to do it as quickly as you can, but it’s a lot more important to get it right than it is to be quick. So, we’re going to take our time," Loomis said. "We’re just going to go through the process and however long that takes, that’s what we’ll take.”

However, Loomis also said a coach would be hired and a staff in place before the club determines its quarterback of the future.

Jameis Winston, who went 5-2 with New Orleans last fall before a major knee injury ended his season, was on a one-year contract. Taysom Hill is under contract through 2025, but has spent the bulk of his career as a utility player with limited experience as a starting QB.

Loomis said choosing the next QB will be “a collaborative decision” with the next coach.

“We’ve got in-house candidates and guys that have been with us and there may be some other candidates," Loomis said, alluding to the possibility of acquiring a QB through the draft, a trade or free agency. "We’ll come up with a collective preference.”