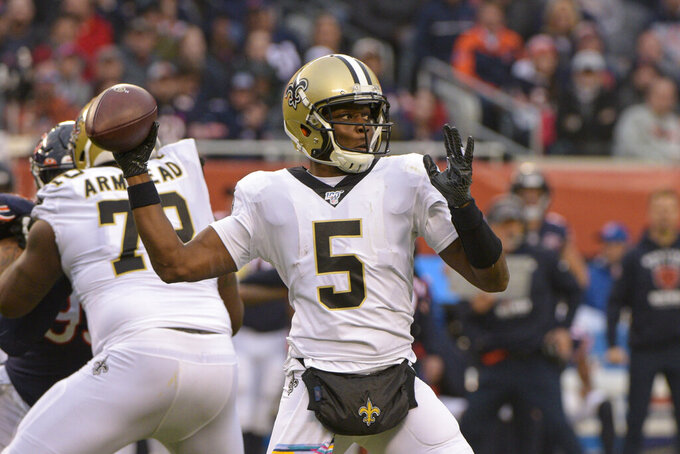 NEW ORLEANS (AP) — With Michael Thomas' prolific receiving and Cam Jordan's pass-rushing prowess setting the tone, the Saints spent most of the past six weeks disproving the notion that they would sink without record-setting quarterback Drew Brees.

Now Brees is back and in form, and the Saints will emerge from this weekend's bye on a six-game winning streak that has validated their Super Bowl-contending credentials and given them confidence in how well-balanced and resilient they've become.

"There are a lot of things to be pleased about, knowing the way the schedule unfolded," coach Sean Payton said, alluding to early season games against playoff hopefuls such as the Texans , Rams, Seahawks , Cowboys and Bears in the first seven weeks.

"We felt like we were going to play some tough teams early, playoff teams early, a challenging West Coast road trip. I think given the circumstances with Drew's injury, I just think there are a lot of things that are encouraging as a coach.

"Obviously, we have a lot of football left. You go through momentum cycles," Payton continued. "I'd say this is a pretty close and resilient group. I think that they care a lot about each other. I think that they understand how to win and also how difficult it is."

Defensively, the Saints are possibly as good as they've ever been since Payton became coach in 2006. Having held five straight opponents to 257 or fewer total yards, they're statistically in the midst of their best stint of shut-down defense since 1992, when they enjoyed an 11-game stretch that saw them limit nine teams to 281 or fewer yards, including five to fewer than 200.

The Saints made marked strides defensively last season, when they ranked second in the NFL against the run. That's where they rank this season, too, despite missing starting defensive tackle Sheldon Rankins for three weeks while he recovered from an Achilles tendon tear last January, and fellow defensive tackle David Onyemata for Week 1 while he served a suspension.

When Rankins returned, the Saints stifled Dallas running back Ezekiel Elliott and has continued shutting down the run since — including against Jacksonville's Leonard Fournette.

Jordan, a 2011 first-round draft choice and 2017 All-Pro, has eight sacks, putting him on pace for a career-best 16. And in the secondary, 2017 Defensive Rookie of the Year Marshon Lattimore has shaken off an undistinctive first couple of games and has begun to lock down top receivers, from Dallas' Amari Cooper to Tampa Bay's Mike Evans and Jacksonville's D.J. Chark .

New Orleans ranks 12th against the pass and sixth in total defense.

New Orleans' effectiveness on defense and special teams eased pressure on Brees' backup, Teddy Bridgewater. But coaches and teammates still gave Bridgewater high marks for how he performed in his five starts — all of which the Saints won.

"He was outstanding," Payton said. "It's a big reason why we acquired him in the offseason. Sometimes, you don't know if you are going to need that. It was good to see the team rally and play well when we needed to and continue that momentum here when Drew came back."

Bridgewater's last performance may have been his best.

With dynamic top running back Alvin Kamara and top receiving tight end Jared Cook out injured, Bridgewater passed for 281 yards and two TDs without an interception in Chicago .

Fortunately for Bridgewater, he could still look for Thomas, who had 42 catches for 551 yards and two TDs during the backup QB's five starts. And when Brees came back from thumb surgery last week , he, too, often looked Thomas' way, connecting with him 11 times for 112 yards and a touchdown.

But Thomas wasn't a one-man show. Even though Kamara and Cook were still out, Brees completed passes to nine players in a 373-yard, three-touchdown performance. Running back Latavius Murray picked up the slack with Kamara out — both as a runner and receiver. Brees connected with tight ends Josh Hill and Dan Arnold, as well as with third-string QB and utility player Taysom Hill, who periodically lines up at tight end or receiver.

"We are right where we want to be," Taysom Hill said. "We set high expectations of ourselves at the beginning of the season. We are kind of hitting our groove and things are going really well."

As for how a week off might disrupt New Orleans' recent momentum, Hill doesn't sound worried.

"This is going to work out really well for us with injuries and kind of be able to take a step back and rehab and kind of get our bodies back," he said. "We've got great leadership that I think as we come back next week, we'll handle it the right way."