Saints' Kamara focused on his health and team, not contract 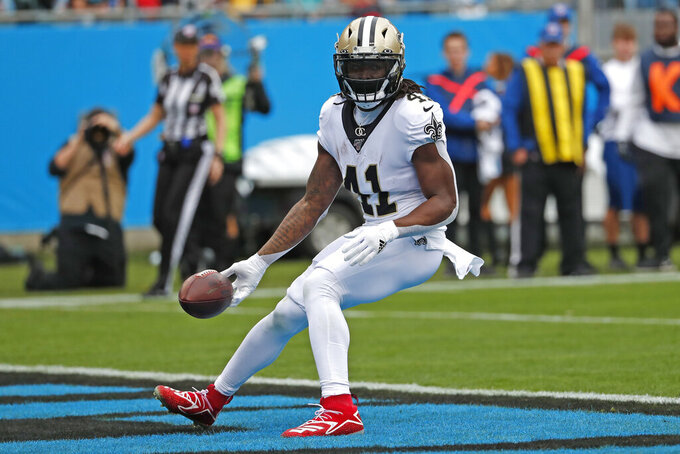 FILE - In this Dec. 29, 2019, file photo, New Orleans Saints running back Alvin Kamara scores a touchdown against the Carolina Panthers during the first half of an NFL football game in Charlotte, N.C. The versatile Kamara, who is entering his fourth pro season out of Tennessee, gained 1,330 yards from scrimmage last season with five touchdowns rushing and one receiving. (AP Photo/Gerry Broome, File)

NEW ORLEANS (AP) — Saints running back Alvin Kamara asserts that he is focused on his health and his team — and is trying not to think about the fact that he has one season left under contract.

“My main focus this offseason was getting back healthy. I had a rocky year last year dealing with injuries, so I’ve dealt with that, got back healthy and I’m here now,” Kamara said Monday during a video conference at Saints training camp.

“I’m not concerned with contract talks at all. Me and my agent talked briefly about it and I told him, I said, 'Don’t tell me anything about a contract until it’s like something where it’s happening or it’s something that I need to know.," Kamara continued. "I don’t talk upstairs (to the front office) about contracts. I don’t talk to coaches about contracts. I’m just here to do my job.”

The versatile Kamara, who is entering his fourth pro season out of Tennessee, gained 1,330 yards from scrimmage last season with five touchdowns rushing and one receiving. While Kamara's total offensive yards ranked 12th among NFL running backs, it fell below the standard he set when he was 2017 offensive rookie of the year (1,554 yards and 13 TDs) and in his even more productive second season (1,592 yards and 18 TDs).

But Kamara missed two games last season because of a knee injury at Jacksonville in mid-October that he said hindered him for the rest of the season. He also played through a separate ankle injury.

“Came back, tried to play as best I could. Tried to manage it throughout the week. Our training staff did the best they could,” said Kamara, who added that he was able to rehabilitate the injury this offseason without undergoing surgery. "I tried to put my best product out on the field. Sometimes it was enough. Sometimes it wasn’t but, you know, I just didn’t want to let my team down.”

Kamara said the knee injury affected his speed, lateral movement, stability and even his confidence.

“Last year was a lot of: Get what I can get and go down. Don’t do too much because I could possibly hurt my knee more or it’s too painful to even think about making another move," Kamara said.

He also recalled being so frustrated that some teammates let him know it was affecting his body language on the field — and he said he regrets that.

“At times, there were situations were, in my head, I’m like, ‘I shouldn’t be out here,'" Kamara recounted. "Obviously, not being able to move my leg how I want to, there was times where my body language was terrible — and I know it.”

Kamara's outward appearance of unhappiness last season — combined with the fact that Carolina do-it-all running back Christian McCaffrey received a four-year contract extension worth $64 million last April — begged the question of whether the Saints' star running back might hold out for an extension this season. After all, Saints receiver Michael Thomas did so a year ago and was rewarded with a five-year, $100 million extension.

So far, general manager Mickey Loomis has declined to discuss contract talks with Kamara or his agent, Damarius Bilbo.

But Kamara doesn't sound inclined to hold out. He could regret that if he struggles with injuries again this season. But if he has another strong campaign, it might drive up his value.

“I bet on myself every year," Kamara said, adding that his contract situation is "just not something that’s on the forefront of my day. It’s not something I wake up thinking about.

“With team success comes individual success, so that’s been what I’m focused on.”

Kamara said that in addition to an offseason training regimen meant to enhance his lower body strength and stability, he has adopted more of a vegetarian diet while also cutting back on sugar and sodium.

“I feel good," Kamara said. "I’m excited about getting back to playing how I know I can play.”