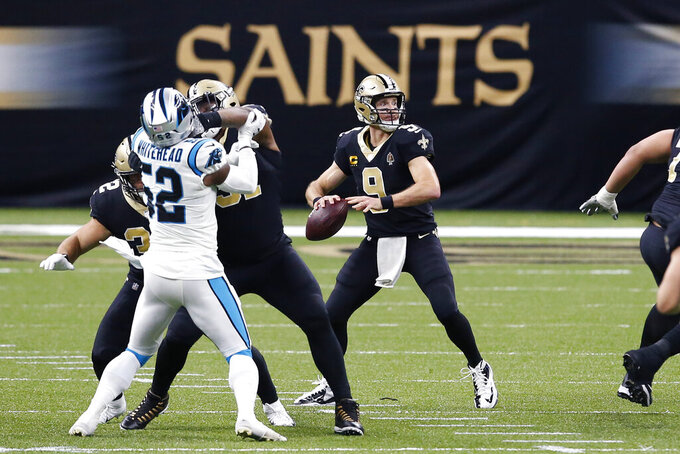 CHICAGO (AP) — Drew Brees and the New Orleans Saints come into Chicago rolling along with three straight wins as they try to build on yet another unbeaten October. They're hitting their stride, steadying themselves after a shaky start.

The Chicago Bears, on the other hand, hope to pick themselves up after stumbling through an ugly loss when they host the Saints on Sunday afternoon.

“There’s a positive vibe in this building amongst our coaches and players,” coach Matt Nagy said. “We are 5-2, we are not 2-5, and I think that’s very, very important for all of us to understand.”

The vibe around Chicago this week was far from positive after a 24-10 loss to the Rams in Los Angeles on Monday night. The Bears' struggling offense managed just 279 yards and was kept out of the end zone. Chicago's top 10 defense gave up a season-high 161 yards rushing and 371 in all.

The Bears fell out of the NFC North lead, a half-game behind Aaron Rodgers and the Green Bay Packers (5-1). And more fuel got poured on the idea that they weren't as good as their sterling record.

The Saints (4-2), meanwhile, have plenty of reasons to like where they're at.

The three-time defending NFC South champions won all their October games for the fourth straight year, capping a 3-0 month with a 27-24 victory over Carolina. They trail first-place Tampa Bay by a half-game and are showing no signs of slowing down.

Brees, at 41 and in his 20th season, has completed just under 73% of his passes with 11 touchdowns and three interceptions. Three-time Pro Bowl running back Alvin Kamara leads the NFL with 824 yards from scrimmage, and the defense ranks among the NFL's best.

New Orleans also has five straight wins over Chicago, including a 36-25 victory last year at Soldier Field with Brees sidelined because of a thumb injury.

“Obviously, Khalil Mack is one of the best players in the league overall," Saints left guard Andrus Peat said. "They are tough up front, they also have Akiem Hicks, who is playing well. They’re definitely a (tough) defense.”

The Bears might have to get by without star receiver Allen Robinson after their top playmaker on offense entered the concussion protocol late in Monday's loss.

Robinson was hurt catching a fourth-down pass with about four minutes remaining. He was tackled on a helmet-to-helmet play by safety Nick Scott on a fourth-down catch, and an official sent him to the sideline.

A Pro Bowl pick with Jacksonville in 2015, Robinson ranks eighth in the NFL in catches (44) and yards receiving (544) this year. Losing him would obviously be a major blow for an offense that's 29th in yards per game and 27th in scoring (19.7 points).

The Bears could also be without another starting lineman after center Cody Whitehair left Monday’s game with a calf injury. They're already missing left guard James Daniels, expected to miss the rest of the season after he suffered a pectoral injury against Tampa Bay on Oct. 8.

Though the offense appears to be broken at the moment, don't expect any major shakeups just yet.

Nagy said this week he plans to stick with quarterback Nick Foles rather than go back to Mitchell Trubisky, and he has no plans to give up play-calling duties.

Foles hasn't been much better since he took over for Trubisky during the Bears' comeback victory at Atlanta in Week 3. He has as many touchdowns (6) as interceptions in five games, four starts. And he had a tough time last week when he was sacked four times — twice by former Bears linebacker Leonard Floyd — and threw two interceptions.

The Bears come in averaging a league-low 84.1 yards rushing, and with one of the NFL's top defenses staring at them, they could be in for another difficult outing. The Saints rank seventh overall and fourth against the run.

The Bears have gone from running for 414 yards through the first three games to 175 the past four. They've averaged 2.4 yards in that span compared to 4.9 the first three weeks.

The Saints are getting healthier on the defensive front.

Tackle Sheldon Rankins has been rounding into form as he’s come back from surgery aimed at shoring up his Achilles tendon. End Marcus Davenport returned two weeks ago after missing the first four games with elbow and toe injuries, and had a sack against Carolina.

When it comes to red-zone defense, the Bears and Saints are opposites.

Chicago has been the NFL's stingiest team, allowing touchdowns on 42.3% of opponents' trips inside the 20. The Saints rank last in the NFL at 86.4%.