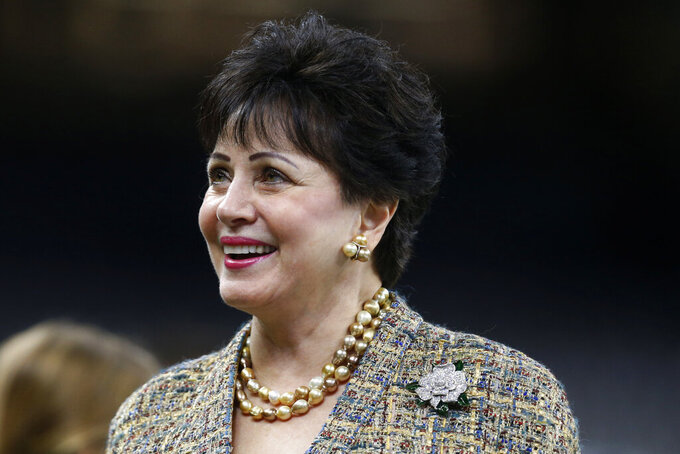 FILE - In this Nov. 24, 2019, file photo, New Orleans Saints owner Gayle Benson, watches the team warm up, before an NFL football game against the Carolina Panthers in New Orleans. The Saints contend their behind-the-scenes public relations work on the area’s Roman Catholic sexual abuse crisis was “minimal,” but attorneys suing the church allege hundreds of confidential Saints emails show just the opposite, the team actively helping to shape a list of credibly accused clergy that appears to be an undercount. Benson, who is close friends with the local archbishop, have disputed as “outrageous” any suggestion that the team helped cover up crimes. (AP Photo/Butch Dill, File)

The owner of the New Orleans Saints said Monday that the NFL team played no role in determining which priests would be named in the list of “credibly accused” clergy published by the area's Roman Catholic Church.

Gayle Benson, a devout Catholic who has donated millions of dollars to church causes, also said in a lengthy statement that she has never “contributed nor will ever make payments” to pay for legal settlements to the victims of clergy abuse.

“To suggest that I would offer money to the Catholic Church to pay for anything related to the clergy-molestation issue sickens me,” she added. It was not clear who had made that suggestion.

The statement marked Benson's first remarks since The Associated Press reported last month about hundreds of confidential Saints emails that allegedly show team executives did behind-the-scenes public relations damage control amid the archdiocese's clergy abuse crisis — communications the Saints have gone to court to keep from being made public. A hearing is scheduled in New Orleans next week to determine whether they may be released.

Benson's statement acknowledged that Greg Bensel, the Saints' senior vice president of communications, helped the Archdiocese of New Orleans “prepare for the media” surrounding the November 2018 release of a list that named dozens of clergy members whom the church deemed “credibly accused” of sexually abusing children.

Benson, who inherited the Saints and New Orleans Pelicans following her husband's 2018 death, said Bensel urged the church to be “honest, complete and transparent.”

“We are proud of the role we played and yes, in hindsight, we would help again to assist the Archdiocese in its ability to publish the list with the hope of taking this step to heal the community," Benson said.

Attorneys for about two dozen men suing the church have painted a different picture of the team's role, alleging in court filings that the confidential emails show executives joined in the church’s “pattern and practice of concealing its crimes.” The attorneys contend that included taking an active role in helping to shape the archdiocese’s list of 57 credibly accused clergy, a roster an AP analysis found was undercounted by at least 20 names.

Plaintiffs attorneys John Denenea and Richard Trahant said in a statement Monday that "it is obvious that Gayle Marie Benson has not read the e-mails the Saints are hiding from the public, or even re-read her own e-mails. If she had read them, she could never have made some of the false claims asserted in her statement today.”