Saints' passing paucity not a problem for Winston, Payton 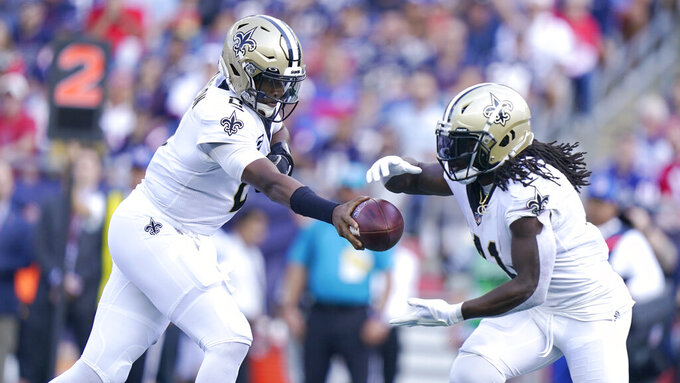 The last time he did that, his team missed the playoffs and he got replaced.

Now in a new phase of his career with the New Orleans Saints, Winston is relishing victories no matter how they come.

He ranks 32nd in the NFL in yards passing per game with just 129, but the Saints have won twice in the season's first three weeks.

Winston sounds comfortable relinquishing his gunslinger approach of old in favor to playing to the overall strengths of his team. The Saints have looked strong on defense. Their ground game, led by the versatile running back Alvin Kamara, also has been productive.

So Winston says it only makes sense to base the offensive game plan on ball security and winning time of possession.

“That’s the best part of our team, so why not give those guys the opportunity and I just need to do my job when the opportunity presents itself,” Winston said. “That’s how we’ve been doing it the two games that we have won.”

And it's not like Winston hasn't made any big plays. He has seven touchdowns passing, highlighted by his 55-yarder to Deonte Harris in a 38-3 victory over Green Bay on Week 1. He passed for two of the Saints' four TDs in a 28-13 victory at New England last week.

It's just that after Sean Payton took his only head coaching job in New Orleans in 2006, he became renowned for creating and calling some of the most prolific passing offenses in NFL history while the now-retired Drew Brees was under center. New Orleans led the NFL in passing in five of Payton's first 10 seasons as a head coach.

Meanwhile, Winston passed for and NFL-leading 5,109 yards and 33 passing touchdowns with Tampa Bay in 2019 — albeit with 30 interceptions blemishing those otherwise exceptional numbers. The Buccaneers then let Winston go and acquired Tom Brady.

The formula the Saints are using this season doesn't conform to the reputations Payton and Winston have built. Yet Payton has long talked about the concept of “complementary football,” or designing game plans with a holistic view of what the offense, defense and special teams units all do best.

And in that respect, Payton appears to have remained true to his core beliefs.

“We are in the business of winning, honestly; it does not have to be aesthetically pleasing either," Payton said.

Payton added that when he first gets a chance to reflect on a just-completed game, "I’m not even thinking of how many yards we just threw for. I’m thinking about what were the keys for victory.”

In New England last Sunday, the Saints' defense produced three takeaways, including an interception return for a touchdown by Malclom Jankins. New Orleans, by contrast, did not turn the ball over while rushing 38 times and passing 21. The Saints, who also blocked a Patriots punt, possessed the ball for nearly 33 minutes and won by two touchdowns despite being outgained in total yards, 300-252.

Playing this way is new to Winston, a 2013 Heisman Trophy winner and NCAA champion with Florida State who, for most of his first five NFL seasons, was expected to carry Tampa Bay's offense with his throwing arm. But Winston sees the wisdom in the approach Payton has taken early this season, Winston's first as a Saints starter after spending last season on the bench as Brees' understudy.

“Coach is teaching me a new way to win. He’s showing me it’s going to be a different game plan every week,” Winston said. “But it is different — it’s different, but it’s worth it.”