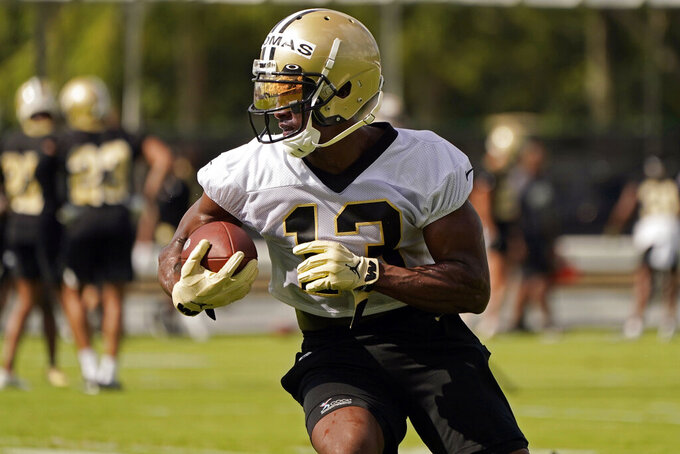 FILE - New Orleans Saints wide receiver Michael Thomas (13) runs after a reception during the NFL football team's training camp in Metairie, La., Wednesday, July 27, 2022. Thomas practiced on Wednesday, Sept. 7, 2022, for the first time since Aug. 18, after working his way back from a hamstring injury. Thomas set a single-season record in 2019 with 149 receptions but missed all of last season because of complications from an ankle injury that also sidelined him for much of the 2020 season. His goal, he said, is to play in the Sunday, Sept. 11, 2022, Week 1 game at Atlanta. (AP Photo/Gerald Herbert, File)

METAIRIE, La. (AP) — New Orleans Saints receiver Michael Thomas couldn't stop smiling as he sat on a countertop in the locker room at club headquarters and discussed his impending comeback.

Nearby, James Hurst beamed about being the Week 1 starter at left tackle after working his way back from a broken bone in his left foot last month.

And, quarterback Jameis Winston sounded rather pleased to see his top receiver and starting blind-side blocker back at practice for the first time since Aug. 17.

Thomas and his quarterback now have just a few days of practice left to try to get back in sync for New Orleans' season opener in Atlanta on Sunday. But Winston doesn't sound too concerned about the compressed timeline.

“When you have an elite receiver like Mike, just get him the ball," Winston said of Thomas, who in 2019 set an NFL record for receptions in a season with 149. "Put the ball around him, and he’s going to make plays.”

Thomas, who missed much of the 2020 season and all of 2021 because of complications related to left ankle surgery, practiced for the first time in more than a year when training camp opened in late July, only to be sidelined about three weeks later with a hamstring injury.

He was listed as limited in practice on Wednesday, but asserted, “I feel great. I think I had a great workday.”

He said the plan is to play this week.

“I’m itching very much (to play). I think it’s kind of obvious,” Thomas said. "But I don’t want to get too excited. It’s still a couple days.”

Hurst was a full participant in practice.

“Right now, I’m a starting left tackle and I want to go out and show everyone that I can be the guy,” said Hurst, who had competition for the job in camp from rookie Trevor Penning, the second of the Saints' two first-round draft picks last spring.

When Hurst went down, Penning took first-team snaps in practice and in preseason games, but had a foot injury in the preseason finale and is starting the season on injured reserve.

Competition “always brings the best out of everybody,” Hurst said. “It made me a better player. I think Trevor would say the same. And that’s what you want.”

Also back at Saints practice on the defensive side was projected starting linebacker Pete Werner, who has missed much of training camp with a groin injury. He also was listed as limited, but earlier this week sounded optimistic about his prospects for playing.

Thomas said that whenever possible, he and Winston have been putting in extra work together and communicating well about how they can help one another.

“Me and Jameis are very much similar: both hard workers, love to compete, love to get better,” Thomas said. "My goal for him is just do whatever he tells me to do and be there when he needs me. ... I believe in what we’re doing. I believe in the work we’re putting in. I believe in the conversation we’re having.”

Thomas also left no doubt that he believes in his own ability to meet, if not exceed, the standard he set three seasons ago, when Saints career passing leader Drew Brees was throwing to him.

Meanwhile, Winston called Hurst a “superstar” because of the way he filled in at every spot on the offensive line, except center, last season.

But since Terron Armstead left in free agency after last season, Hurst had been penciled in as the new starting left tackle.

“He's a great teammate,” Winston said of Hurst. "He’s a great man and I know he works his tail off. So, he’s going to do great.”