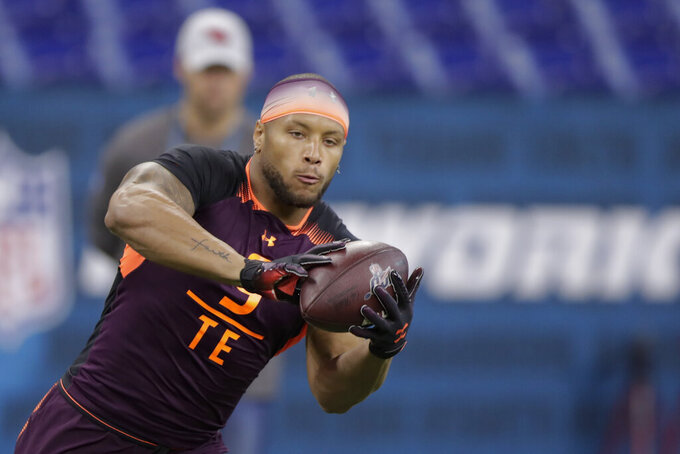 "This offense really allows me to put my talents on display. And that's why I'm really excited. That's why I really wanted to come here," said Mack, who went from one of the highest rated tight ends in the country coming out of high school to an underachieving college player who nearly didn't get drafted.

"They're using me to stretch the field here, and they're using me as a mismatch in the routes that I'm running," Mack said following Saints rookie camp last week. "It's just to go out there and be a playmaker, use my athletic ability."

This week, the 6-foot-4, 249-pound Mack is getting his chance to run pass routes against veteran defensive backs, as opposed to the rookies and tryout players on the field last week. So there remains much to prove, and coach Sean Payton made it clear Mack cannot rely on a change of scenery alone to improve his fortune.

"It's not like, 'Oh, I'm in a new city and a new offense and I'm going to be used better,'" Payton said. "Part of that's on him. His achievement, or underachievement, in college is, I would say, his responsibility."

Mack insists he has learned from setbacks in college, has matured and holds himself accountable for mistakes that primarily consisted of academic struggles and some violations of team rules. But he also says he doesn't necessarily regret how his Notre Dame career played out because it might have been the wake-up call he needed.

"Everyone has to go through adversity at some point in time. The only thing that really matters is how you respond," Mack said. "I've been through some tough times but it's helped me out a lot in the long run and I'm happy to be the person I am today. Because if I wasn't, then I wouldn't be here."

Mack said his focus on football as a freshman cost him at Notre Dame, where course work was more demanding than he anticipated. Academic difficulty caused him to miss his sophomore season. In his first season back with the Irish in 2017, he caught just 19 passes for 166 yards and one TD, and then was suspended for the Citrus Bowl against LSU because he didn't clean the weight room, as ordered, after he was late for class.

"The academics was just coming in as a freshman, as a kid, immature, didn't have things in order. And I just slacked, you know? I was more so focused on football than in school, didn't have my priorities straight," Mack said. "Then the bowl game situation — I should've just went in and cleaned up the weight room and didn't.

"So those two things always labeled me as a guy who had issues off the field," Mack continued. "But my coaches, my teammates for sure, they know I'm not a guy that you're going to have problems with me and women and DUIs and drugs and — I mean, I'm not that type of dude. For me, it was just little mistakes. And it was just maturity."

Mack's best season was last season. He caught 36 passes for 360 yards and three touchdowns for a team that advanced to the College Football Playoff. It was just good enough for the Saints to select him in the seventh round of the draft.

"I'm just glad I got the call and that I got the opportunity," Mack said, recalling the moment he was drafted. "I cried my eyes out when I picked up the phone and you hear coach Payton and you're looking at the screen and the Saints are next. My mom starts crying. And you're like, 'I'm just thankful.'"

In New Orleans, Mack said he loves his position coach, Dan Campbell, and expects him to be a good influence on and off the field.

"He played tight end but he knows so much about the game," Mack said. "Also, he cares about his guys. I think that's the biggest thing I noticed."

And Mack has seen other players — namely, Jimmy Graham — thrive after arriving in New Orleans with a similar skill set — and even less on his college football resume.

"How they used him here, it allowed his talents to be on fully display," Mack said. "I remember when he was here with the Saints, he was a touchdown machine. ... He thrived in this system and it fit him perfectly, so hopefully it can work out for me."

NOTES: The Saints announced they had signed defensive end Wes Horton and waived linebacker Darrell Williams on Tuesday, when they held their first of three voluntary, non-padded offseason practices this week. Horton is entering his seventh NFL season out of Southern California after spending his first six pro seasons with Carolina.