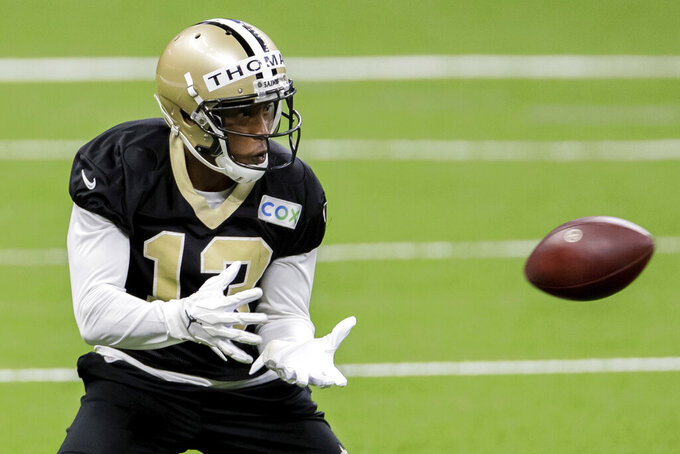 FILE - In this Saturday, Aug. 29, 2020, file photo, New Orleans Saints wide receiver Michael Thomas catches the ball during NFL football training camp in New Orleans. A person familiar with the situation says Sunday, Oct. 11, 2020, that Saints receiver Thomas has been suspended one game for conduct detrimental to the team after punching a teammate during practice. (David Grunfeld/The Advocate via AP, Pool, File)

New Orleans also has listed reserve guard Nick Easton out for for a second straight game because of a concussion.

Thomas, named AP 2019 Offensive Player of the Year after setting an NFL record with 149 catches in a season, is missing his sixth straight game because of a two separate injuries sandwiches around a one-game suspension.

He has not played since injuring his ankle in the season opener, when he had three catches for 17 yards.

He was on track to return in Week 5 when he was benched one game after a punching a teammate at practice. But when the Saints returned to practice following a Week 6 bye, Thomas hurt his hamstring, which limited him this week.

Callaway, an undrafted rookie whose snaps have increased dramatically in is previous two games, hurt his ankle late in the Saints’ 27-24 victory over Carolina last Sunday after he had a season-best eight receptions for 75 yards.

The Saints also could be without receiver Emmanuel Sanders, who remains on the Saints’ COVID-19 reserve list and has not practiced this week, and but could be eligible to be activated on Sunday.

Easton was hurt during the Saints’ Week 5 victory against the Los Angeles Chargers.