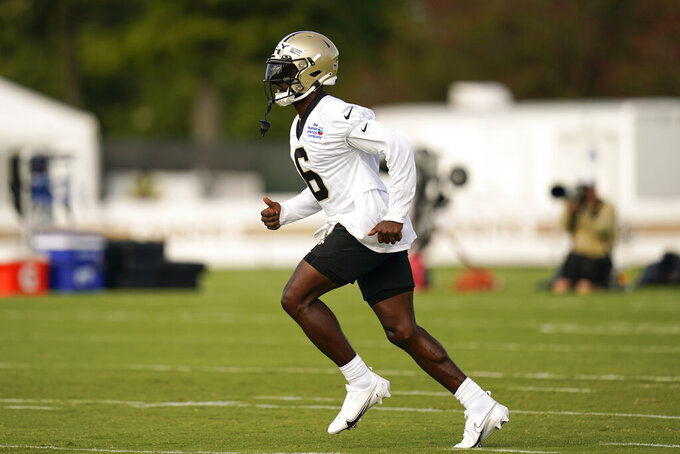 FILE - New Orleans Saints safety Marcus Maye (6) runs through drills during training camp at their NFL football training facility in Metairie, La., on July 30, 2022. Maye was arrested Thursday, Sept. 1, in what authorities termed a “road rage incident". He was booked with one count of aggravated assault with a firearm. (AP Photo/Gerald Herbert, File)

METAIRIE, La (AP) — New Orleans Saints safety Marcus Maye was arrested Thursday in what authorities termed a “road rage incident,” and he was booked with one count of aggravated assault with a firearm.

Jefferson Parish Sherriff's Capt. Jason Rivarde said in a statement that Maye, 29, was "identified as the driver of a black SUV in which he is accused of pointing a firearm at a vehicle occupied by several juvenile females."

Maye's attorney, Eric Hessler, said in a statement provided to NFL Network that Maye “vehemently denies the allegation from a motor vehicle incident, and looks forward to defending himself when all the facts come out.”

Louisiana state law lists aggravated battery with a dangerous weapon as a misdemeanor punishable by up to $1,000 in fines and up to six months in jail. Maye was released from the Jefferson Parish Correctional Center Thursday on $30,000 bond, Rivarde said.

The Saints signed Maye, who formerly played for the New York Jets, to a three-year, $28.5 million contract this offseason. Maye is projected to be one of two starting safeties for New Orleans this season, along with Tyrann Mathieu.

Saints coach Dennis Allen, who also oversees New Orleans' defense, said the club was made aware of the arrest and was “still gathering all the information, after today's practice.

"So, we’re really not going to have a comment on it at this time until we get more information,” Allen added.

The Saints open the season on Sept. 11 at Atlanta. If Maye is unavailable to play, veteran P.J. Williams would be a top candidate to replace him in the lineup.