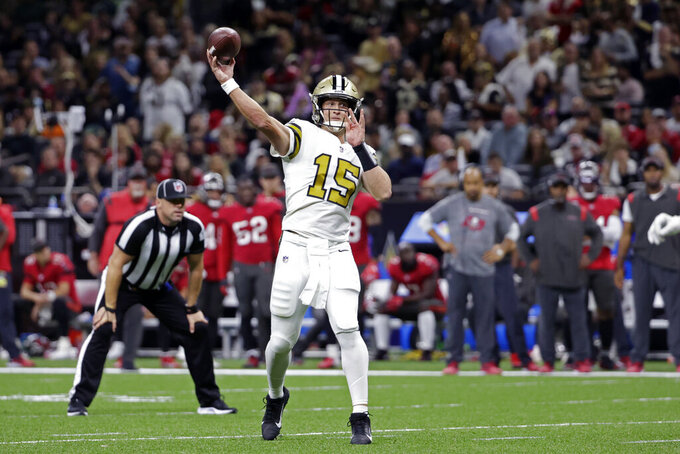 OPENING LINE: Saints by 6, according to FanDuel SportsBook.

TURNOVER DIFFERENTIAL: Falcons minus-4; Saints plus-7.

FALCONS PLAYER TO WATCH: Rookie TE Kyle Pitts has 33 catches for 484 yards and a touchdown. He's only bound to improve with experience and the Saints' defense has struggled at times with top receiving tight ends.

SAINTS PLAYER TO WATCH: DE Cameron Jordan tends to play well against Atlanta and has sacks in consecutive games as well as a forced fumble last week

KEY MATCHUP: The Saints' offense has largely revolved around a running game that features Alvin Kamara and has recently added Mark Ingram. The Falcons' defensive front has struggled to stop the run.

SERIES NOTES: The Saints have gone 21-9 against the Falcons since Sean Payton became head coach in 2006. ... The Saints have won three straight and six of the last seven. ... The rivalry has included 51 games decided by seven or fewer points.

STATS AND STUFF: QB Matt Ryan has 3,856 yards passing (296.6 per game) and has accounted for 21 TDs (20 passing, one rushing) in 13 career starts in New Orleans. ... Ryan has passed for at least two TDs in each of his past five road games. ... Ryan ranks eighth all time in yards passing with 57,581 and 10th in TDs passing with 360. ... RB Cordarrelle Patterson caught five passes and had 72 scrimmage yards and a TD receiving last week. ... Patterson is one of four RBs, along with Derrick Henry, Darrell Henderson and Jonathan Taylor, to gain 60 or more scrimmage yards seven times this season. Patterson has at least five receptions in five of his past six games. ... Pitts ranks second among rookies in yards receiving (484) and is tied for fourth in receptions (33). ... LB Deion Jones had 14 tackles and a forced fumble in Week 8. Jones has 11 or more tackles in four of his past five games. ... LB Foysade Oluokin had a career-high 16 tackles last week. ... Saints lost starting QB Jameis Winston for the season with a left knee injury. ... Backup QB Trevor Siemian passed for 159 yards and TD without a turnover in relief. Siemian has 5,540 yards passing and has scored 29 TDs (28 passing, one rushing) in 25 career starts. ... RB Alvin Kamara had 76 scrimmage yards and his 45th-career TD rushing last week. Kamara has 13 TDs (10 rushing, three receiving) in his past seven home games. He has 354 career receptions and can surpass Roger Craig (358) for the most by a running back in his first five seasons. ... WR Tre’Quan Smith had his first TD receiving last week in his second game of the season after missing five games with a hamstring injury. ... Jordan had a sack and his 12th career forced fumble last week. Jordan has 13 sacks and 14 tackles for loss in his past seven games against Atlanta. ... DE Tanoh Kpassagnon has a sack in each of his past two games. ... CB P.J. Williams had a 40-yard interception for a touchdown last week, his second career pick-six.

FANTASY TIP: Now that Ingram has returned to New Orleans, he's on the brink of eclipsing Deuce McAllister for the Saints' all-time rushing mark. Payton has been known to try to get players going when they approach significant milestones. Ingram needs 63 yards to pass McAllister's mark of 6,096 yards and this could be his last chance to do so in the Superdome because New Orleans' following two games are on the road.