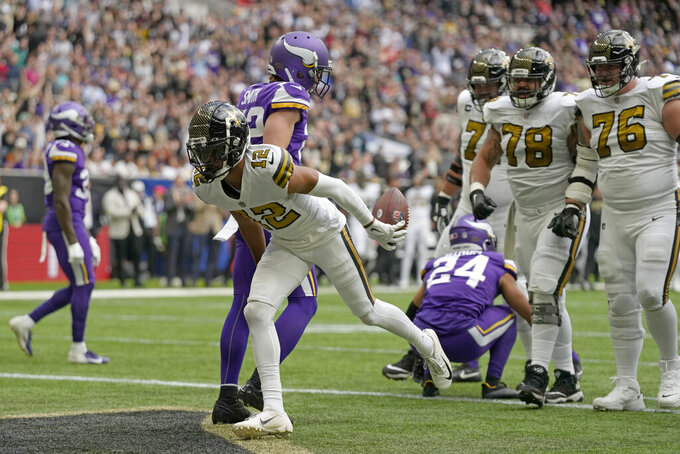 TURNOVER DIFFERENTIAL: Seahawks even; Saints minus-7.

SEAHAWKS PLAYER TO WATCH: DK Metcalf had a season-high seven catches for 149 yards in the victory over the Lions. He is on pace for 100 catches and has one touchdown receiving.

SAINTS PLAYER TO WATCH: Rookie receiver Chris Olave, drafted 11th overall out of Ohio State, leads the Saints in receiving with 21 catches for 335 yards. He also has one TD receiving.

KEY MATCHUP: Metcalf against top Saints cornerback Marshon Lattimore, a normally elite performer who is looking to bounce back after giving up a costly pass interference penalty and pivotal reception in the fourth quarter of last week's loss to Minnesota.

KEY INJURIES: Most of Seattle’s key pieces are healthy, although RB Rashaad Penny was limited in practice because of a shoulder injury. CB Justin Coleman could be on the verge of returning and adding depth to the secondary. DE/OLB Darryl Johnson is out with a foot/ankle injury, but DE L.J. Collier could return from an elbow injury this week. ... The Saints could be without season-opening starting QB Jameis Winston (back, ankle), WR Michael Thomas (foot), DE Payton Turner (chest) and S P.J. Williams (quadricep) all missed at least some practice this week. Top running back Alvin Kamara has predicted he would return to the lineup after sitting out last week with a rib injury.

SERIES NOTES: The Saints are 9-6 against the Seahawks during the regular season, including victories in the past three such meetings. ... Seattle last visited New Orleans in 2016, when the Saints won 25-20. Seattle hasn't won in the Superdome since 2004.

STATS AND STUFF: QB Geno Smith was the NFC offensive player of the week after throwing for 320 yards and two touchdowns against Detroit. Smith had 132.6 passer rating in the win. Smith leads the NFL in completion rate at 77.6% through four games. ... RB Rashaad Penny rushed for season-high 151 yards last week. Penny had 141 yards combined through the first three games. ... TE Will Dissly is one of two NFC pass catchers with TD receptions in three of the first four games. ... Rookie CB Tariq Woolen had second career interception and first career touchdown last week returning a pick 40 yards for a score. ... Seattle didn’t have a punt last week for the first time in franchise history. ... The Saints are trying to snap a three-game skid. ... New Orleans has lost six of its past eight games played in the Superdome. ... QB Andy Dalton made his first start for the Saints last week in place of the injured Winston and passed for 236 yards and a TD without an interception. Dalton passed for 418 yards and two TDs without an interception in his previous start vs. Seattle in 2019 with Cincinnati. Dalton has passed for 300-plus yards in each of his past two games against the Seahawks. ... DE Cameron Jordan had a half sack last week and has 10 sacks and 10 tackles for loss in his past 10 games. ... LB Demario Davis had nine tackles and a sack last week, his second straight game with a sack. ... S Tyrann Mathieu had his first interception with New Orleans last week, also the 27th of his career. Mathieu is one of three active players (along with Tashaun Gipson and Duron Harmon) with an interception in each of past 10 seasons.

FANTASY TIP: While the Saints have been solid against the pass this season, the attention they'll pay to Metcalf could open opportunities for WR Tyler Lockett, who leads Seattle in catches (27) and yards receiving (302) this season.