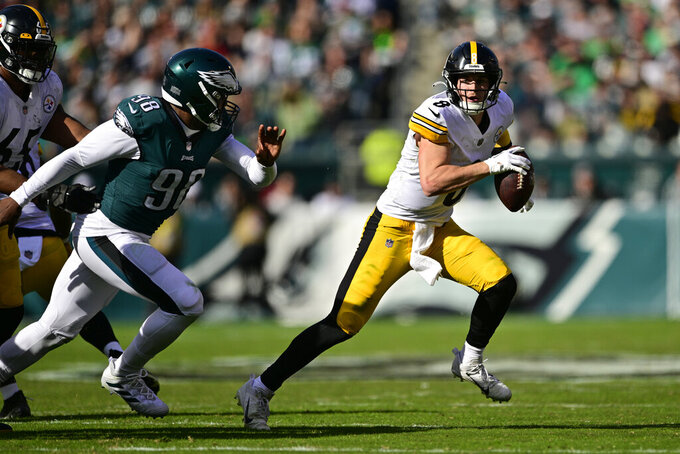 LAST WEEK: Saints lost to Ravens 27-13; Steelers were off.

TURNOVER DIFFERENTIAL: Saints minus-10; Steelers minus-4.

SAINTS PLAYER TO WATCH: LB Demario Davis leads the club with a career-high six sacks — all on periodic inside blitzes. His 50 solo or assisted tackles this season include eight total tackles for loss. He also has a fumble recovery.

STEELERS PLAYER TO WATCH: RB Jaylen Warren. The undrafted rookie free agent has been one of the few bright spots on an offense that is languishing near the bottom of the league. Pittsburgh coach Mike Tomlin has intimated Warren may take on a larger role with starter Najee Harris struggling. Warren is averaging 5.3 yards per carry, compared to 3.3 for Harris.

KEY MATCHUP: Steelers premier edge rusher T.J. Watt against the Saints offensive line, which is banged up after allowing four sacks against Baltimore last week. The Saints could be playing with right guard Cesar Ruiz filling in at center and with backups at both guard spots, putting a premium on the abilities of right tackle Ryan Ramczyk and left tackle James Hurst to avoid confusion with the players filling in alongside them during Pittsburgh pass-rush packages.

KEY INJURIES: Saints CB Marshon Lattimore has missed four games with an abdomen injury. Receiver Jarvis Landry has missed five games with an ankle injury. RB Mark Ingram missed last week’s game with a knee injury. Center Erik McCoy and defensive end Marcus Davenport each left Monday night’s game with calf injuries and linebacker Pete Werner left the Baltimore game with an ankle injury. ... Steelers K Chris Boswell is likely to miss his second straight game with a groin injury. The team signed Matthew Wright during the week if Boswell is unavailable. ... DT Larry Ogunjobi (knee) and LB Myles Jack (knee), the team's leading tackler, missed practice time this week. ... CB William Jackson, acquired from Washington at the trade deadline, is dealing with the same back injury that essentially marked the end of his tenure with the Commanders. ... CB Ahkello Witherspoon is likely out with a hamstring injury.

SERIES NOTES: The Saints leads the series 9-7 after winning the past three meetings. New Orleans rallied for a 35-32 victory the previous time it played in Pittsburgh on Nov. 30, 2014. ... The winning team has scored at least 31 points in five of the past six meetings. It's unlikely either squad will reach that number this time. The 16 meetings are the fourth fewest for the Steelers against any opponent since the 1970 merger.

STATS AND STUFF: Saints coach Dennis Allen has lost 34 of his first 45 games as an NFL head coach, including an 8-28 record in his first and only other head coaching post with the Oakland Raiders from 2012-2014. ... Saints QB Andy Dalton is making just his second road start this season. His other came at Arizona, when he passed for 361 yards and four TDs, but also was intercepted three times. ... Dalton has 3,331 yards and 19 TDs passing in 16 starts vs. Pittsburgh. He also has rushed for two TDs against the Steelers. ... RB Alvin Kamara has six-plus catches and 100-plus scrimmage yards in four of his past five games, but was held to just 62 scrimmage yards last week. ... Rookie WR Chris Olave led New Orleans with six receptions for 71 yards last week. ... Olave leads all rookies in receptions (43) and yards receiving (618). ... TE Juwan Johnson caught his third TD pass of the season last week, tying him for the team lead. ... DE Cameron Jordan is only player with five-plus sacks in each of the past 11 seasons. ... Davis has had a tackle for loss in four straight games and needs two more tackles for loss to reach 10 for a sixth straight season. ... DT David Onyemata has a sack in his past two games. ... S Tyrann Mathieu has both of the Saints’ interceptions this season. ... The Steelers are hoping Watt's return bolsters a pass rush that struggled in his absence. Pittsburgh had seven sacks in a season-opening win at Cincinnati in Week 1 and mustered just eight in seven games with Watt watching from the sideline after tearing his left pectoral. ... Expect an uptick in snaps for slot receiver Steven Sims following Chase Claypool's trade to Chicago. TE Pat Freiermuth also figures to benefit from more targets with Claypool gone. ... The Steelers are 2-6 through eight games for the third time since 2006. Pittsburgh won its ninth game in both 2006 and 2013 while rallying to an 8-8 finish. The Steelers haven't started 2-7 since 1988. ... Pittsburgh is the only team in the NFL that has yet to score a touchdown of 20 yards or longer. Pittsburgh's longest score this season is 8 yards. ... The Steelers made no substantive changes to their offensive staff during the bye week, meaning they are committed to embattled coordinator Matt Canada for the balance of the season. The Steelers are in the bottom third of the league in essentially every major offensive statistical category.

FANTASY TIP: Saints RB Alvin Kamara should get a heavier workload after being limited to just 12 touches in last week's loss to Baltimore. New Orleans would be wise to get Kamara more involved in the passing game against a banged-up Steelers defense that will likely be missing Jack, the team's best cover linebacker.