Saints without Kamara, both offensive tackles vs. Eagles 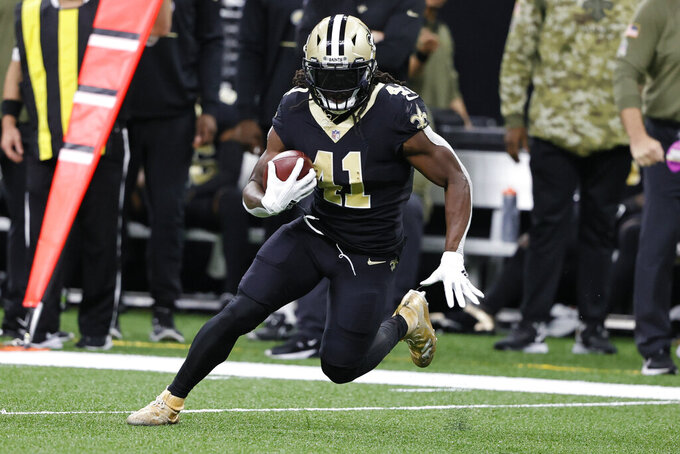 New Orleans Saints running back Alvin Kamara (41) runs against the Atlanta Falcons during the second half of an NFL football game, Sunday, Nov. 7, 2021, in New Orleans. (AP Photo/Butch Dill)

In addition to listing those three prominent players as out on Friday's injury report, the Saints also made a change at kicker. New Orleans waived rookie Brian Johnson, who missed two extra point kicks in last week's 23-21 loss at Tennessee, and elevated recently re-signed kicker Brett Maher from the practice squad to the active roster.

Kamara, who was sidelined by a knee injury during New Orleans' loss at Tennessee, returned to practice on a limited basis early this week, but missed practice on both Thursday and Friday before being ruled out for this week's game against the Eagles.

Kamara has 530 yards and three touchdowns rushing this season to go with a team-high 32 catches for 310 yards and four TDs receiving.

Armstead, who has knee and shoulder injuries, also did not play last week. Ramczyk, who has a knee injury, will miss his first game this season.

Taysom Hill, a reserve quarterback who enters the game to run the option and also plays tight end and on special teams, returned to practice on Friday on a limited basis and is questionable for Sunday's game.

While all three of those players are reserves, Kpassagnon is tied for the team lead in sacks with four.

Maher also was with the Saints briefly during preseason but was waived with an injury designation.

The Saints have had five kickers on their roster this season, including Wil Lutz, the club's regular kicker for the previous five seasons. But he never kicked this season because of a core muscle injury and is now on injured reserve for the rest of this season.

Kickers Cody Parkey and Aldrick Rosas also have been on the roster. Rosas spent the first four regular season games with New Orleans before being released after missing three field goals combined in weeks 3 and 4. Parkey played just one game with the Saints in Week 5 and was injured. Johnson spent four games with New Orleans.