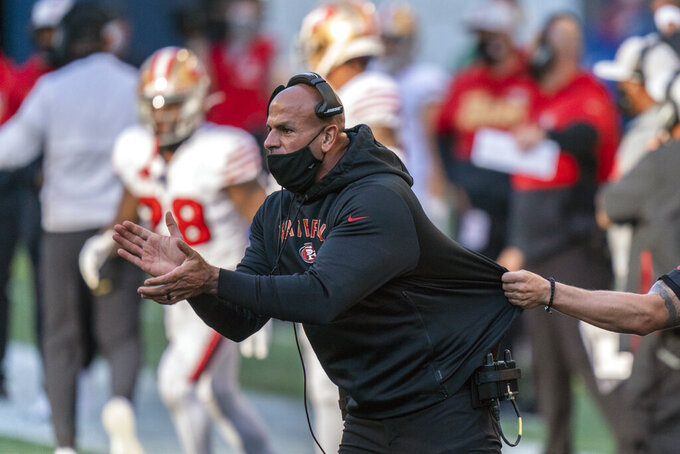 FILE - In this Nov. 1, 2020, file photo, then-San Francisco 49ers defensive coordinator Robert Saleh cheers on his team from the sideline during the first half of an NFL football game against the Seattle Seahawks, in Seattle. The New York Jets' new head coach is charged with turning around the fortunes of a franchise that has missed out on the playoffs the past 10 seasons — the NFL's longest active drought — and has a few generations of frustrated fans impatiently waiting for at least a chance at another Super Bowl. After all, it has been 52 years and counting. (AP Photo/Stephen Brashear, File)

The New York Jets' new head coach is charged with helping turn around the fortunes of a franchise that has missed out on the playoffs the past 10 seasons — the NFL's longest active drought — and has a few generations of frustrated fans impatiently waiting for at least a chance at another Super Bowl.

After all, it has been 52 years and counting.

The buzz words often used since the season ended and repeated after Saleh's hiring and official introduction Thursday have been “culture” and “identity.” Both seemed to be lacking the last two years under Adam Gase, who went a miserable 9-23.

But here comes Saleh, who has been part of a Super Bowl-winning team — Seattle in 2014 — and went back with another — San Francisco — last year. The 41-year-old former 49ers defensive coordinator wasn't flashy or boisterous, but he was assertive with his vision for the future.

Jets chairman and CEO Christopher Johnson announced a change in the team's usual structure in which Saleh will report directly to general manager Douglas, who will in turn report to Johnson. The three stressed it will be a “partnership,” with all of them along with team president Hymie Elhai assuming responsibility for turning the Jets into winners.

And Saleh made it clear that things will change on his watch.

“I cannot tell you enough about how excited I am to work with this entire Jets organization,” he said, “and understanding that when we wake up in the morning, we will all — from top down — step on the pedal and find a way to get somewhat better than we were when we woke up.”

The message was a good one, and refreshing. Sure, it might be a bit of the usual talking points from an eager new coach. But the Jets are convinced this time, they've got it right with Saleh.

And it goes beyond just words.

“When we met with Robert, I was struck by his presence,” Johnson said. "He displayed an ability to engage with us in a virtual interview. He also clearly communicated a vision of this team that aligns with ours. When we met in person, it validated everything we believed following our initial meeting. Robert has shown through his journey here that he is a leader, one that will engage the entire team and will partner with Joe to continue building the culture of a winning organization. He has consistently demonstrated the ability to innovate, motivate and collaborate.

“His character and passion are what this team needs.”

It's not often a coach hiring is met with universal praise from former players, current players, media and fans. And rarely when it comes to the Jets.

Saleh made NFL history by becoming its first Muslim American head coach. But his extensive and impressive coaching journey — 16 years as an NFL assistant after three at the college level — and his passion to lead brought him here.

And he has everyone believing that this is the start of a new era for the Jets.

One without jokes about losing and being a laughingstock.

“It will take time, but everything we do is going to be designed to win championships in the future,” Saleh said. "So, when we talk about, ‘All gas, no brake,’ and that mentality, waking up in the morning and putting your foot to the pedal and having that mindset, again, go to bed better than when you woke up, that’s the mindset we’re going to have.

During the next several months, Saleh — an avid chess player — will be involved in making key moves to build a winner.

He and Douglas will pore over the roster, decide which of the 19 scheduled unrestricted free agents will return, and who should join them in free agency. And then there's the draft, where the Jets hold the No. 2 overall pick, as well as No. 23.

The future of Sam Darnold remains uncertain, although Saleh was complimentary of the 23-year-old quarterback. New offensive coordinator Mike LaFleur's system would suit Darnold's playing style, but that doesn't eliminate the possibility the Jets could look elsewhere in the draft.

That's all part of the monstrous task facing Saleh as he settles in as the franchise's 20th head coach. For now, though, he has provided the Jets and their fans a breath of fresh air — with a sense of identity, vision and promise.

This story has been corrected to show that Saleh has coached twice in the Super Bowl but not in consecutive seasons.