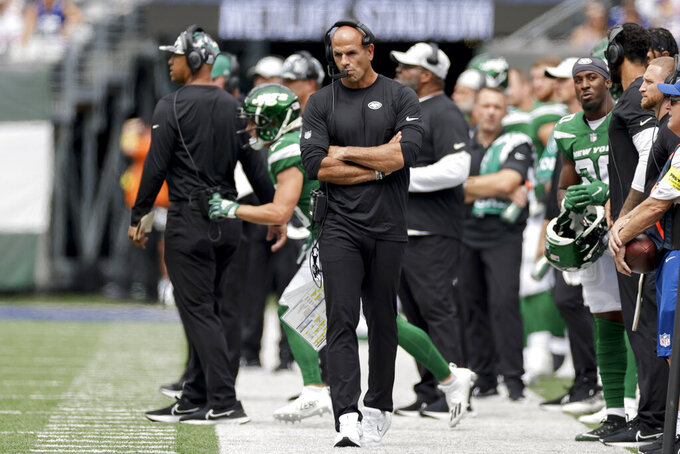 FLORHAM PARK, N.J. (AP) — Robert Saleh looks at his New York Jets roster and is excited about what it might be able to accomplish.

That sort of hope is something Jets fans have hung onto for decades. With frustration ultimately prevailing.

But the coach believes changes are coming — for now and the future.

“It’s a team that’s being built,” Saleh said Wednesday. "Different than what I feel this organization has had in the past. And not to speak poorly on anything or anything that’s been done in the past, but this is a built roster, not bought. And because of it, I just feel like there’s a chance for this team to really grow together and last for a long time, but a lot of exciting players, a lot of potential to have some game changers.

“It’s just going to come down to coaches developing in the way that allows them to play to their capabilities.”

That part is on Saleh and his staff. But general manager Joe Douglas has put together a roster that appears will be at least competitive, and with the type of depth not seen around these parts in a while.

"We’re certainly a more talented team than we’ve ever been,” said Douglas, in his fourth season as GM.

And it's tough to argue that. He helped upgrade the offense by drafting wide receiver Garrett Wilson and running back Breece Hall and signing left guard Laken Tomlinson and left tackle Duane Brown. The defense also was improved with the signings of cornerback D.J. Reed, safety Jordan Whitehead and linebacker Kwon Alexander, and the picks of cornerback Ahmad “Sauce” Gardner and defensive linemen Jermaine Johnson and Micheal Clemons.

The Jets also were a surprise target of talent-needy teams after initial roster cuts, with an NFL-high seven players claimed off waivers Wednesday. Five others who were on New York's initial 90-man roster to start camp are also on other teams now.

“I think it’s recognized, obviously throughout the league, so you’re very comfortable about the depth of the roster and the players we can line up against anybody,” Saleh said.

The Jets hope that translates into rising in the standings — and stopping their 11-season playoff drought, the NFL's longest active skid without making a postseason appearance.

Players such as C.J. Mosley have repeatedly said they believe the playoffs are “a realistic goal” for this year's Jets. They still insist that to be true, even with second-year quarterback Zach Wilson recovering from a knee injury that could sideline him early in the regular season.

“I still believe we’re going to win championships here,” Saleh said, echoing his declaration when he was hired last year. “I think when you look at Joe and his staff and the way he communicates with us as a coaching staff, our process is too good. I think the players that we’ve brought in are made of the right stuff.”

Saleh also credited ownership for giving the football side all the support they need.

“It’s too good for this not to work,” the coach said.

It has been a while since the Jets were even in the hunt for the playoffs in the final month — the 2015 season, actually, when the Todd Bowles-led squad lost to Buffalo in Week 17 and finished 10-6. It's also the most recent time they had a winning record.

Douglas said the goal remains to be playing “meaningful games” late in the season. When asked if that means playing games that matter in December, the GM insisted: “Absolutely. I do.”

There has been lots of talk of change in the culture and vibe around a franchise that hasn't been in the Super Bowl since Broadway Joe made good on his guarantee by beating the Colts in 1969.

Jets fans have heard it all since. And they want to believe this time.

They need to see it on the field first, starting in Week 1.

“Just really excited again to continue to build this roster and develop these young men,” Saleh said, “and live up to the promise that we made when we first got here.”

NOTES: WR Denzel Mims, who requested a trade last week, says he has shown he can be a starter. “I feel like I already pretty much (proved it), from OTAs until now,” he said. “I mean, they’re pretty set on who they want.” Mims, a second-round pick in 2020, is behind Corey Davis, Elijah Moore and rookie Garrett Wilson on the depth chart. “I feel like I can change their mind on that,” Mims said. "I feel like I’ve been doing that. Their minds are pretty made up, though.” ... The Jets signed 13 players to their practice squad, including QB Chris Streveler. He led New York to three fourth-quarter comeback wins in the preseason. ... Douglas said OT Mekhi Becton recently had surgery on his knee in Los Angeles and doctors are optimistic about his long-term playing future. Becton, on season-ending IR, fractured a kneecap during training camp and continues to rehabilitate in LA.