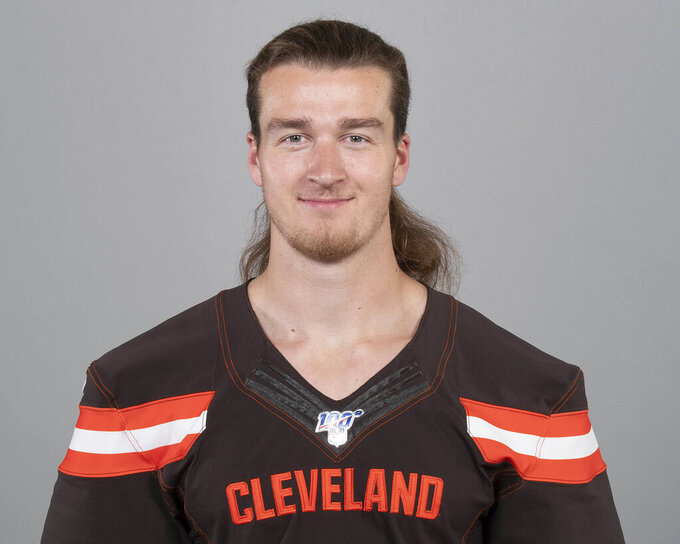 File-This May 2, 2019 photo shows of Jamie Gillan of the Cleveland Browns NFL football team. A Browns undrafted rookie punter, Gillan, nicknamed “The Scottish Hammer,” has beaten out veteran Britton Colquitt. Gillan won the starting job with solid performances in the past two preseason games, but it’s still surprising the Browns would take him over Colquitt, who was a Pro Bowl alternate last season and has spent nine seasons in the NFL. He won a Super Bowl ring with Denver. (AP Photo, File)

The undrafted rookie free agent with the thick accent and powerful leg beat out veteran Britton Colquitt as the Browns reduced their roster to 53 on Saturday with general manager John Dorsey pulling off two more trades.

Of all of Dorsey's decisions, the biggest surprise was Gillan over Colquitt, a Pro Bowl alternate last season and former Super Bowl winner in Denver.

The Browns have turned their kicking duties over to two rookies: Gillan and kicker Austin Seibert, a fifth-round pick who recovered from an errant start in training camp and made the roster over incumbent Greg Joseph.

Seibert made all six field-goal attempts in Cleveland's final two preseason games to lock up his spot.

"What it reflects is we're comfortable with where we are with those two young guys," Dorsey said. "They have demonstrated their ability to be skillful at both of their positions. We knew what Greg Joseph was and we knew what Britton Colquitt was as players. That's why we gave those guys those two games to play because we really didn't know how they'd respond under pressure. I thought they did a really nice job of taking on the challenge, accepting it and succeeding at achieving that goal.

"The organization is excited for the two young men. We have complete confidence in both of their abilities."

With his long hair, Gillan looks like he just walked off a "Game of Thrones" set. He's quickly become a fan favorite in Cleveland. He has a booming right leg and had a 74-yard punt in an exhibition game against Indianapolis.

Gillan's backstory is fascinating. Born in Scotland, he came to the U.S. when he was 16 and took up place-kicking after watching a high school game. He got a scholarship at Arkansas Pine-Bluff after learning about an opportunity on Facebook.

While training this offseason, he literally kicked the air out of three footballs he bought at a store before receiving cares packages of footballs from the Browns and San Francisco 49ers so Gillan could continue to chase his dream.

A fifth-round pick from Oklahoma, Seibert got off to a brutal start in training camp but made a small adjustment in his technique and came on strong when it mattered most.

The Browns were busy before the 4 p.m. cut-down deadline as Dorsey, who has masterfully revamped Cleveland's roster, acquired speedy wide receiver Taywan Taylor from Tennessee and guard Justin McCray from Green Bay.

Still, he'll give the Browns another deep, complimentary threat for quarterback Baker Mayfield while Antonio Callaway serves his four-game suspension for violating the league's substance-abuse policy.

Dorsey also added depth to his offensive line, bringing in McCray just two days after dealing for guard Wyatt Teller from Buffalo. McCrary has made 13 starts and played in 25 regular-season games.

The Browns released a few notable players, including wide receiver and former Ohio State quarterback Braxton Miller, tight end Seth DeValve and wide receiver Damon Sheehy-Guiseppi, a longshot who had lied his way into a workout with the Browns and returned a punt for a TD in his first preseason game.

Dorsey kept three quarterbacks with Drew Stanton and Garrett Gilbert behind Mayfield on the depth chart.

Gilbert was signed in April after the Alliance of American Football folded. He's the leading passer in the defunct league's brief history, and he led the Browns during the preseason.

"I think that when it was Gilbert's time to shine, he showed he could stand up and he could deliver," Dorsey said. "You applaud him for how he's played the game, how he's progressed in the preseason and how quickly he's grasped this offensive system and how much he's grown in his respective role."