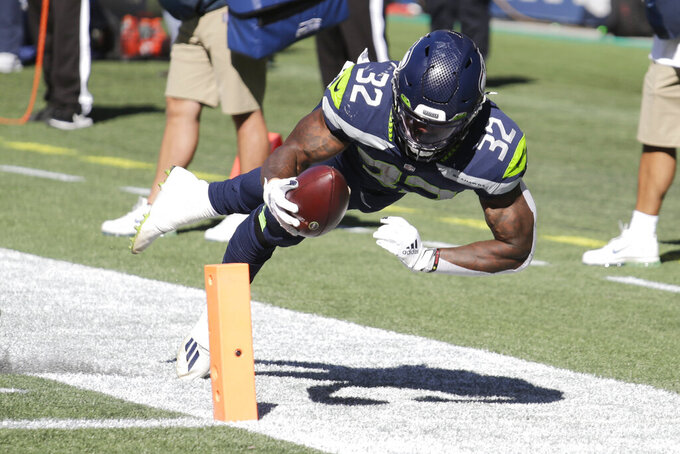 Seattle Seahawks running back Chris Carson (32) dives near the end zone during the first half of an NFL football game against the Dallas Cowboys, Sunday, Sept. 27, 2020, in Seattle. The Seahawks won 38-31. (AP Photo/John Froschauer)

RENTON, Wash. (AP) — Seattle Seahawks running back Chris Carson is thankful getting alligator rolled by Dallas defensive tackle Trysten Hill at the end of a play two weeks ago didn’t end with him suffering a serious injury.

He was also pretty upset.

“Kind of like what everybody thought about it. I thought it was kind of a (B.S.) play,” Carson said Thursday, talking about the play for the first time since the Week 3 win over the Cowboys. “But it is what it is.”

Despite getting twisted awkwardly and suffering a sprained knee against the Cowboys, Carson was right back on the field last Sunday and had his best game of the season in Seattle’s win over Miami. Carson rushed for a season-best 80 yards and found the end zone twice, his first two rushing touchdowns of the season.

Carson said Hill reached out after the game and apologized. Hill was fined $6,522 for the play.

“I was nervous, of course. I mean, that’s one of my injured legs that I had during high school so my first initial reaction was something happened again,” Carson said. “I felt a sharp pain. But I was relieved once the MRI results came in and said that I was good. Just a sprain and everything like that so I was kind of relieved about that.”

After only carrying the ball six times in Week 1, Carson has averaged nearly 16 carries over the past three games. He’s likely to get another heavy dose Sunday against Minnesota with a bye week on the horizon and the uncertainty over the status of backup Carlos Hyde, who is dealing with a shoulder injury.

“No matter what the situation is, injuries, stuff like that, I want to tell myself that if I can play through it, I’m going to play through it,” Carson said. “I know that’s a big notch a lot of teams have on me is, ‘Can he play a whole season?’ And I want to prove to myself and prove to everybody else that I can.”