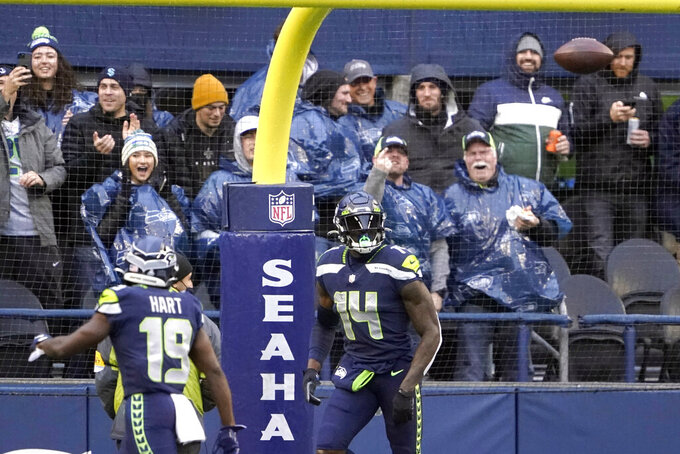 Fans, background, cheer as Seattle Seahawks' DK Metcalf (14) tosses aside the ball after scoring on an 84-yard pass play against the New Orleans Saints during the first half of an NFL football game, Monday, Oct. 25, 2021, in Seattle. (AP Photo/Ted S. Warren)

SEATTLE (AP) — Not even two months ago, the Halloween visit from Jacksonville was thought to be a blip in Seattle’s schedule before a midseason break and a challenging November ahead.

Now? Well, it might be the last chance for the Seahawks to turn around their season and begin the difficult trek of trying to get back into postseason contention in the NFC.

“I hate learning the hard way, but everybody has to learn the hard way,” Seattle coach Pete Carroll said. “This is one of those times right now, so we have to fight through it and that’s what I’m doing. There’s nothing in me that thinks otherwise, that’s all you can do right now.”

So there is added, unexpected urgency to the matchup with Jacksonville. A fourth straight loss by Seattle seems unfathomable. But with Russell Wilson still on the sideline as a spectator with his finger injury and deficiencies in several areas, nothing is a given with the Seahawks right now.

“There’s a lot of football left, and we definitely feel like we can position ourselves on a nice little run if we can get out of our way,” Seattle linebacker Bobby Wagner said.

Jacksonville has spent two weeks enjoying its first victory since Week 1 of the 2020 season after knocking off Miami in London.

It was the first NFL victories for quarterback Trevor Lawrence and coach Urban Meyer, two of college football’s most accomplished winners. Jacksonville's previous win before beating the Dolphins came on Sept. 13, 2020, a span of 399 days. Its 20-game losing streak was the longest since Tampa Bay dropped 26 in a row as an expansion team during the 1976-77 seasons.

Now, the Jaguars (1-5) are going for two straight wins, something they haven’t accomplished since midway through the 2019 season.

“We’ve always had the confidence of we know we’re a good team, we know what we’re capable of. But eventually, you have to put that into action,” Lawrence said. “You have to go win a game and it took us five games to do that. But now we know, if we prepare, if we play together, play a full four quarters, we can beat whoever and that just made that a fact.”

The Jaguars have struggled on the West Coast, going 3-13 in Los Angeles, Oakland, San Diego, San Francisco and Seattle. All three victories came in Oakland. They are winless in three trips to Seattle, getting outscored 110-32 in the Emerald City.

“That’s why you go out a day early and let them get acclimated and go,” Meyer said.

But this might not be the usual Seattle crowd the Jaguars will be facing. Fans seem to be growing restless with the Seahawks’ struggles and tickets could be found on the secondary market this week for as little as $30.

There is no timeline on when Wilson will return from his finger injury, but the most optimistic beliefs say there is a slight chance he could be back following Seattle’s bye. While it’s likely Geno Smith will get one more start for Seattle, there is a chance this week could be his final one.

So far, his performances have been mixed. He nearly pulled off a comeback stepping in for Wilson against the Rams, but he’s made critical errors in the closing moments of all three games he’s played.

Against the Rams, it was a late interception. Against the Steelers, he fumbled in overtime. Last week versus New Orleans, Smith took a handful of sacks in situations where he had to get rid of the ball.

“We had our opportunities to finish drives and obviously finish the game and we didn’t get it done,” Smith said.

Seattle’s defense has shown it’s making a turn the past few weeks. Playing against some of the worst offenses in the league has helped, but the Seahawks have held their past two opponents under 350 yards in each game. And Seattle’s third-down defense has been the best in the league for the past four weeks allowing just 21.6% conversions.

Meyer’s respect for Carroll and the Seahawks is evident by his staff and roster. Meyer brought in 11 players or coaches who worked in Seattle, where Carroll spent the past dozen years and won Super Bowl 48. Nine of those will return for a homecoming of sorts. The list includes cornerback Shaquill Griffin, offensive coordinator Darrell Bevell, quarterbacks coach Brian Schottenheimer and special teams coordinator Nick Sorensen.

“It’s not by accident that I’ve hired guys that were a part of that organization,” Meyer said.