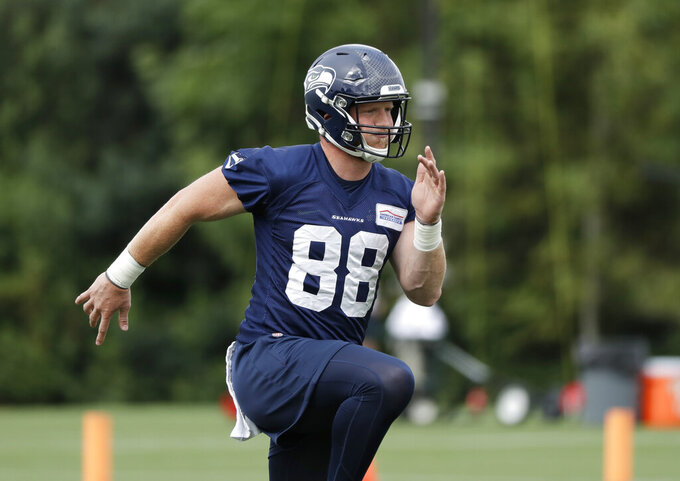 RENTON, Wash. (AP) — Will Dissly spent Thanksgiving with his family in Montana last year for what he guesses was the first time since 2013.

The Seattle Seahawks tight end would rather have been on the field with his teammates.

But Dissly, who missed several other Thanksgiving celebrations while playing in college, was in the initial stages of recovering from surgery for a torn patellar tendon. The chance to be at home was a much-needed break after going from wrapping up his career with the Washington Huskies, to preparing for the NFL draft, to beginning his pro career.

"I was in a straight-leg brace for six weeks and it was a good opportunity to go and spend time with them, spend Thanksgiving with the family and kind of just heal and rest. If I'm here I would just want to do more and more, and I think rest and recovery is important," he said. "It was almost like a mini vacation."

Once he returned to Seattle, however, he turned his entire focus to recovering from the injury that derailed his promising rookie season. Seattle's fourth-round pick in the 2018 draft had quickly developed into a contributor when he went down in Week 4 against Arizona.

Ten months later, Dissly is going through full team drills in training camp and feeling optimism that he will be ready by the start of the season.

"I think anytime you go down and you're kind of removed from the spotlight a little bit, it really puts you in a humbling state," Dissly said. "I really tried to self-reflect, kind of figure out what got me here. That's work ethic, that's my family. Dedication to the game, love for game. That's just something you don't lose."

Dissly is part of a position group that is vital to the success of Seattle's offense. With the Seahawks returning to a run-first mentality a year ago, the need for tight ends that can block on the edge became even more important. It's why drafting Dissly was critical — he was arguably the best blocking tight end in last year's draft.

When Dissly went down, Seattle had to adjust. Ed Dickson and Nick Vannett were solid at the position, but the Seahawks regularly turned to using offensive tackle George Fant as a sixth lineman lined up at tight end. Seattle still intends to use Fant in that role, but Dissly's return would be a boost.

"There's a lot of really good pieces there. I don't know if it's going to be one guy, I think it could be a little more by committee," offensive coordinator Brian Schottenheimer said. "You got George Fant there, you got (Dissly) coming back, Nick Vannett scored a lot of touchdowns for us, Ed Dickson, that veteran leadership that he brings is awesome. It's a really good group, so again we think that's its very flexible."

Another option is Jacob Hollister, who was acquired in a trade with New England and has the ability to play off the line and create matchup advantages.

The preseason will be an important test for Dissly. While he hasn't had any discomfort in the knee during his first week of activity, Dissly is trying not to get ahead of himself.

"I've been going every day, putting pads on. It's been feeling really good and I'm excited to see the next day and what it has to offer," Dissly said.

NOTES: QB Russell Wilson was absent from practice Friday. Wilson's grandfather, Dr. Harrison B. Wilson, died Sunday and his memorial services were Friday and Saturday in Virginia. It's the first training camp or regular season practice Wilson is believed to have missed in his career. ... DE Ezekiel Ansah was in a helmet and shoulder pads for the early portions of practice for the first time Friday as he continues to recover from offseason shoulder surgery.

39 minutes ago
By Pat Graham 2 hrs ago
By Arnie Stapleton 6 hrs ago
By W.g. Ramirez 9 hrs ago
By Brett Martel 11 hrs ago