Seahawks hope to be creating foundation despite QB question 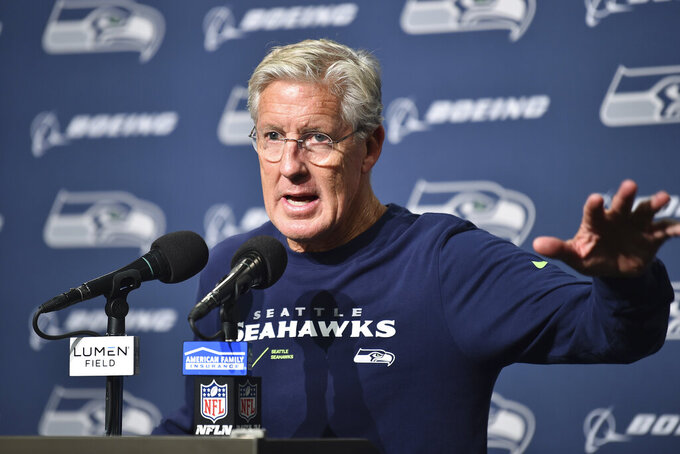 Strengths: Seattle has an elite pair of wide receivers in DK Metcalf and Tyler Lockett even with an uncertain quarterback situation. Linebacker Jordyn Brooks takes the spot of Bobby Wagner after a breakout season in 2021. Quandre Diggs is one of the more underrated defensive backs in the league and Seattle hopes it will be able to use Jamal Adams in ways that utilize his strengths and hide his weaknesses in coverage. Expect a more aggressive, disruptive defense under new coordinator Clint Hurtt.

Weaknesses: There are several uncertainties with the Seahawks, but the obvious weakness is at quarterback. Seattle knows what its ceiling is with Geno Smith. Drew Lock may have more upside, but his past shows a penchant for mistakes and poor decisions. The fact that this is the decision Seattle faces highlights the weakness of the position. Whoever ends up under center for the majority of this season is likely a stopgap until next year when there are expected to be a significant number of QB options available in the draft.

Camp Development: Don’t be surprised if rookie cornerbacks Coby Bryant and Tariq Woolen find their ways onto the field regularly early in the season. Both have been impressive during the preseason and look capable of holding their own if thrown into action from the start.

Fantasy Player To Watch: If Seattle is going to be successful offensively then the run game must be successful. Rashaad Penny is in line to be the starter and the conclusion to last season couldn’t be much more impressive with four games of 135 yards or more in the final five weeks. But the Seahawks are very high on Walker and he could end up with just as much fantasy production as Penny.

Expectations: This feels like a redo of 2011 for Pete Carroll. The defense is in the infancy of a makeover, but with pieces that show the promise of potentially being very good. The offense has a plan and anchors in key spots — wide receiver, tackles, running back — that is just waiting on a quarterback to emerge. The schedule is a gauntlet playing in the NFC West, but Carroll has never won fewer than seven games in a season for a reason. The Seahawks likely won't be playoff contenders, but should be competitive in building the foundation for another run in the coming seasons.