Seahawks must regroup after loss of Penny, 5-game win streak 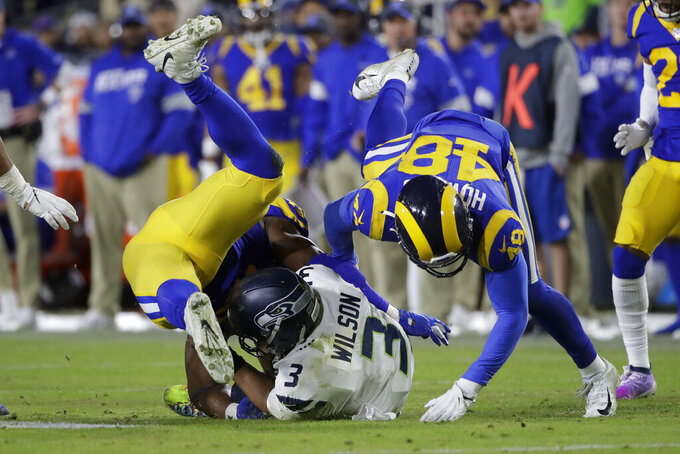 LOS ANGELES (AP) — Rashaad Penny badly sprained a ligament in his left knee on the Seahawks' opening drive, and a miserable night at the Coliseum never got much better for Seattle.

Long after their valuable running back went to the locker room, a whole bunch of Seahawks streaks ended in the Los Angeles Rams' 28-12 victory Sunday.

Seattle's five-game winning streak decisively went down, as did the Seahawks' streak of scoring an offensive touchdown in 43 straight games since their 2017 season opener. Their franchise-best six-game road winning streak to open the season also ended in emphatic fashion.

And while the Seahawks were disappointed by their biggest dud of the season, they also realize their goals are all eminently reachable even after this embarrassment, which prevented them from clinching a playoff spot.

“Everything is still out in front of us,” Wilson said after failing to throw a touchdown pass for the first time all season. “There's a lot of season left. It's not a setback for us. It's just the beginning, and we feel like there's a lot more we can do, a lot of areas that we can get better.”

Wilson and his offense spent long stretches of the game going backward or jogging in place. The superstar quarterback was under constant pressure, absorbing five sacks and 11 hits while throwing for 245 yards with one interception.

The Seahawks' game plan likely was altered when Penny got hurt on a catch-and-run and couldn't resume his tandem with Chris Carson. Penny could be lost for a significant amount of time, if the grim faces of his coaches and teammates are any indication. Coach Pete Carroll didn't immediately announce a long-term prognosis.

“That was devastating," said Seahawks receiver Tyler Lockett, who had four catches for 43 yards. “I"m sure it hurt us, especially just trying to move forward in the game, being able to have plays for him.”

The Seahawks have plenty of playmakers who could have stepped up in Penny's absence, but nobody did enough. Carson rushed for 76 yards, but Seattle was down by double digits from early in the second quarter onward, forcing the offense out of its rhythm and into increasing desperation — which played into the hands of the Rams' vicious pass rush.

“I think we have to come out with better energy,” said safety Quandre Diggs, who scored Seattle's only touchdown on a 55-yard interception return in the third quarter.

“I think that starts with us,” Diggs added. "It starts with the leaders, including myself. We’ve got to bring better energy as a team in all three phases. I think we will get it fixed. We know who we are. We know what we have to do. At the end of the day, it’s one loss. We’ve got three more games to play.”

Diggs is correct: Despite the decisive feeling of this loss, not much really changes for the Seahawks.

If they finish the regular season 3-0, starting with a win at Carolina next Sunday, the Seahawks would still win the NFC West by virtue of a season sweep of the 49ers.

San Francisco (11-2) leads the NFC West again after beating New Orleans, but the Seahawks and Niners meet in Seattle on Dec. 29 in the regular season finale. Seattle probably would have had to win that game to win the division, no matter what happened in LA.

While the offense works on its protection for Wilson and readjusts its running game, Seattle's defense must figure out how to prevent future quarterbacks from getting as comfortable in the pocket as Jared Goff did. With plenty of time to throw, Goff picked apart the Seattle secondary for 293 yards and two touchdowns.

“Without question, early in the game, they were controlling the tempo,” Carroll said. “We weren't surprised, but we didn't handle it as well as we would have liked.”