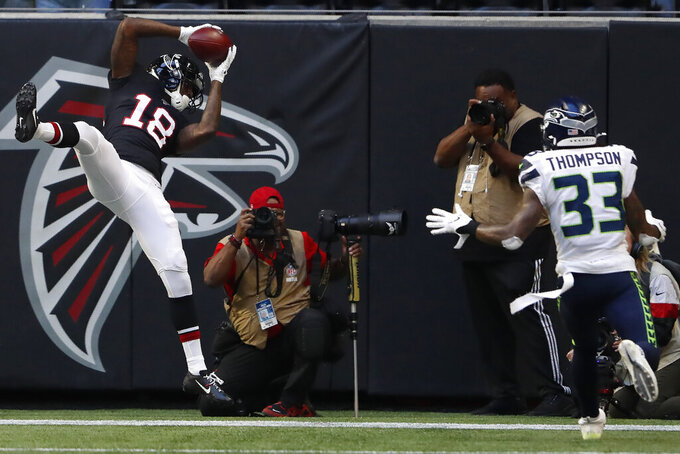 The deadline came and went with no movement. No new center nor any other option for a banged up offensive line. No additional tight end or defensive back for depth.

The Seahawks kept their surprise moves for the day after the deadline.

Seattle placed free safety Tedric Thompson on injured reserve Wednesday, with Carroll saying the third-year player needs surgery to repair a torn labrum in his shoulder. Carroll said it's an injury that Thompson has been playing through for a significant period, but the optics and timing of the move raise questions.

Thompson has not been listed on any injury reports this season with a shoulder injury and he played every snap in last Sunday's 27-20 victory over Atlanta. Three days later, his season is over and comes as Seattle is expecting to get safety Bradley McDougald back after missing most of the past two games with back spasms.

"He's been really toughing it out for a good while," Carroll said. "We're going to miss him. He's been an integral part of our stuff. A really good teammate. We love the guy and we hate that he's not going to get to play, but we've got to fix him up."

The move with Thompson was surprising because there was no indication that he had an injury that severe. Thompson had missed two games earlier in the season with a hamstring injury and his play at safety had been inconsistent — he gave up a couple of big plays on the back end that irritated Carroll. Seattle also traded for safety Quandre Diggs from Detroit last week for additional depth at the position.

Seattle otherwise staying silent at the trade deadline was also unexpected. There appeared to be areas where Seattle could have attempted to upgrade but decided to stay in house to fill its needs.

The biggest hole to fill is at center, where Joey Hunt will take over as the starter after veteran Justin Britt suffered a torn ACL in his left knee early in last week's win over Atlanta. Hunt was a sixth-round pick in 2016 who has played sparingly in his three previous seasons.

He was thrown into a difficult situation last week, when Britt went down in the first quarter, and played well. He believes having a full week of preparation and knowing he's the starter will help going into Sunday's game, where he will face Tampa Bay's defensive tackle duo of Ndamukong Suh and Vita Vea.

"At the end of the day, you just have got to think about it that if you're one play away, you can be out there playing the whole game," Hunt said. "That's what happened last game for me. I feel like whenever you realize that, after one play you can be the starter, then it makes it a little bit easier to prepare every week and wanting to be ready whenever the opportunity comes."

The other position where Seattle was thought to be seeking an upgrade was at tight end after losing Will Dissly to an ACL Injury in Week 6. Seattle has used Luke Willson and Jacob Hollister the past couple of games, but could be getting veteran Ed Dickson back this week. Dickson was designated to return from injured reserve by Seattle on Wednesday. Carroll said Dickson could be activated for Sunday depending on how he handles practice.

Dickson underwent minor knee surgery late in the preseason and has been ready to go for several weeks.

"Bad timing. I was like I'm going to do everything in my power to see that I can get back on the field and listen to the trainers and everybody's process and work my butt off to get to this point," Dickson said.