Secondary is primary focus for Ravens' defense this season 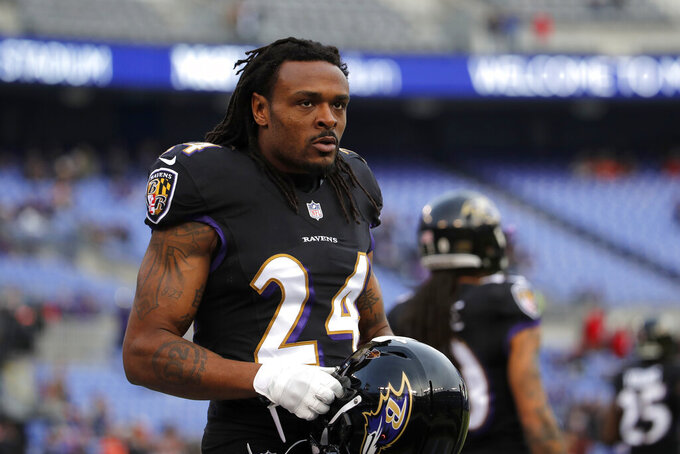 FILE - In this Dec. 30, 2018, file photo, Baltimore Ravens cornerback Brandon Carr warms up before an NFL football game against the Cleveland Browns, in Baltimore. During a busy offseason, the Baltimore Ravens put a high priority on fortifying a secondary that last season played a huge role on the top-ranked defense in the NFL. That included retaining Brandon Carr. (AP Photo/Carolyn Kaster, File)

OWINGS MILLS, Md. (AP) — During a busy offseason, the Baltimore Ravens put a high priority on fortifying a secondary that last season played a huge role on the top-ranked defense in the NFL.

Throw in 2017 first-round pick Marlon Humphrey and six-year pro Tony Jefferson, and it would seem as if the Ravens have a secondary capable of being among the best in the league.

"I'll tell you one thing: The standard is high for those guys," coach John Harbaugh said Tuesday after the first session of the team's three-day mandatory minicamp.

Given that the Ravens lost linebackers Terrell Suggs, C.J. Mosley and Za'Darius Smith to free agency, the defense's hope of carrying on the franchise's tradition of excellence likely depends on the guys on the back end.

"We've got a lot of resources committed to the secondary," Harbaugh said. "We value coverage. We think it's important with the way we structure our defense. We love having those guys back there."

Carr has played 11 seasons in the NFL and has never missed a start, a streak of 176 games. A regular participant this spring at OTAs, he can't wait for the season to begin.

"We've got a lot of talent in this backfield, a lot of guys who have made plays throughout their careers, and new guys who are rising," said Carr, who shed the braids that protruded from under his helmet for the past five years.

The Ravens, like every team, focus first on stopping the run. Tackles Brandon Williams and Michael Pierce form a sizable duo up front, although Pierce's weight proved to be an issue Tuesday; he was told to leave the field shortly after the team stretched.

"He's not ready to practice, from a safety standpoint, for his own health," Harbaugh said.

Jimmy Smith, on the other hand, reported in excellent shape. With nine seasons behind him — all with Baltimore — the 31 year old made certain his stamina and strength would not be an issue as he prepares to enter the final year of his contract.

"When you're young, you eat chicken wings, hot wings, pizza. You go out and play a game and it's no problem," he said. "The older you get, you start to actually feel like one candy bar kind of slowed me down today. You have to pay attention to that, but when you're young you don't really notice it."

Smith and the rest of the secondary expect to be noticed during the 2019 season, when the Ravens strive to reach the playoffs for the second year in a row after a three-year hiatus.

"(Owner Steve) Bisciotti believes in us. Our coaching staff and the people upstairs, they believe in our secondary," Smith said. "We've got a lot of vets back there and we kind of have to be the driving force for the defense since we are the ones with the most experience."

Thomas, like Smith, is a nine-year veteran whose athletic skill is supplemented by the ability to provide experience and leadership.

"He's a dog. Very passionate," Smith said. "I can tell he's going to bring a lot of energy to our team."