Security inside stadium and out for Super Bowl in Atlanta 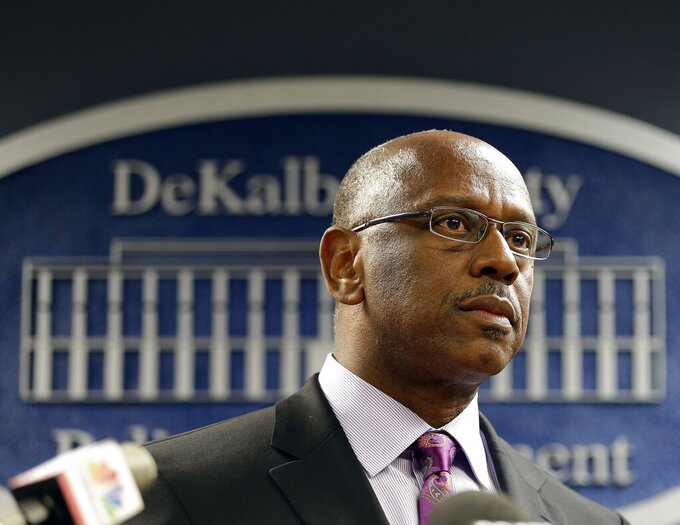 FILE-In this Wednesday, Aug. 21, 2013 file photo, DeKalb County Police Chief Cedric L. Alexander listens to a question during a news conference in Tucker, Ga. Legions of police and federal agents will be protecting the stadium as Atlanta hosts Super Bowl 53, but recent attacks in the U.S. and around the world underscore how terrorists are striking less-secure areas outside sports stadiums, arenas and airports, experts say. (AP Photo/John Bazemore, File)

ATLANTA (AP) — When Super Bowl 53 kicks off less than two weeks from now, legions of police and federal agents will be positioned to protect fans inside and outside the Atlanta stadium where the New England Patriots and the Los Angeles Rams face off.

The game will bring international attention, which makes it a potential target for terrorism, said Brian Levin, a former New York City police officer who is director of the Center for the Study of Hate and Extremism at California State University, San Bernardino.

"We fortify these events because we have to," Levin said. "They're the brightest bug lamps that attract an array of possible extremists and also unstable people as well."

Authorities won't discuss specifics of their security plan. But they say they will safeguard areas beyond the downtown Mercedes-Benz Stadium and make officers visible across the city. The city's police department has worked with more than 40 state, federal and local law enforcement agencies to develop the plan, Atlanta Police Chief Erika Shields said. Officers will work 12-hour shifts and will "position ourselves so that we can react immediately to whatever scenario we are confronted with," Shields said.

The chief said law enforcers have been preparing for two years, during which time they visited Super Bowls in Houston and Minneapolis to observe safety measures taken by their counterparts.

Recent attacks in the U.S. and around the world have taught authorities that they must be prepared to defend more than the obvious targets.

Atlanta knows this well. During the Olympic Games in 1996, a man set off a pipe bomb at Centennial Olympic Park, a downtown public space that lacked the high security of the athletic venues and Olympic Village where athletes were staying. Shrapnel from the bomb tore through a crowd of concertgoers on July 27, 1996, killing a woman who was hit in the skull with a nail, and wounding more than 100 others.

"Our main focus at that time was on the Olympic Village," said Richard Stogner, who was in charge of finances for the Olympics and as such was involved in security meetings weeks and months before the games. Stogner witnessed the deadly violence from his office overlooking the park. He recalled walking onto his balcony and seeing a large cloud of white smoke and at least a couple of people lying on the ground.

Shields said there was a desire at the time to make the park "family friendly," so the decision was made to keep security more lax there.

"In hindsight, that was a mistake," she said.

In the days leading up to the Super Bowl on Feb. 3, the park — which has been closed off with high chain-link fencing in some places — will play a central role as it hosts numerous concerts and other game-related celebrations.

In addition to increased security around the city, Atlanta Fire Rescue will put some of its paramedics on bicycles so they can reach patients in areas crowded with pedestrians, Chief Randall Slaughter said. And Shields noted that a joint operations center that will also include officials from Georgia Power and the city's mass transit system is set to open Saturday.

Authorities will not take their preparations for granted, however, because terrorists "never stop creating, they never stop thinking," Shields said.

In Atlanta in 1996, "the guy just decided that he wanted to blow up people, so he set a bomb off," Stogner said. "That's hard to prepare for."

During a soccer game between France and Germany near Paris in November 2015, it was outside the stadium where suicide bombers blew themselves up, killing a bystander. And in May 2017, it was as fans left a concert by singer Ariana Grande in Manchester, England, that a bomb was detonated, killing more than 20 and wounding more than 100.

In recent years, threats have evolved from large terrorist groups to small cells or "lone wolves" who can be harder to identify. Some become radicalized on the internet, borrowing hatred from other groups and blending it with their own views, Levin noted.

The motives of others are difficult to discern, such as the sniper in a Las Vegas high-rise who opened fire on an outdoor country music concert, killing 58 people and wounding more than 800 others in October 2017, Levin said.

Cedrick Alexander, a former public safety director in the metro Atlanta county of DeKalb, said he believes Atlanta "is going to be one of the most-prepared cities in America" because of its experience handling national events.

But he notes that the lesson of the Las Vegas massacre is that "you have to be prepared for anything."