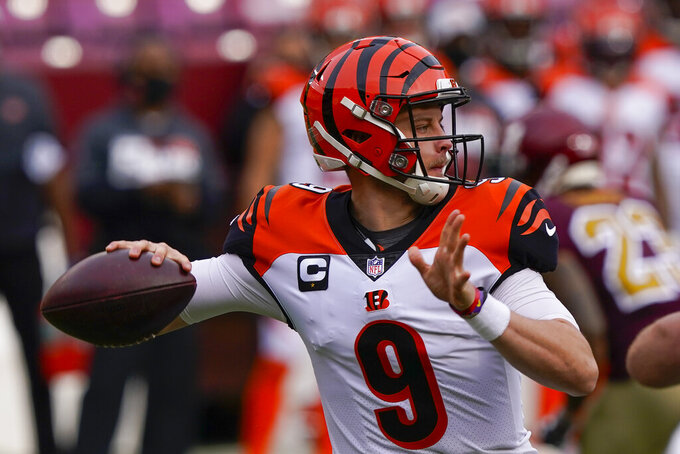 Cincinnati Bengals quarterback Joe Burrow (9) throwing the ball during the first half of an NFL football game against the Washington Football Team, Sunday, Nov. 22, 2020, in Landover. (AP Photo/Susan Walsh)

LANDOVER, Md. (AP) — Joe Burrow couldn't put any weight on his left leg as he was helped onto a cart. Cincinnati Bengals teammates and Washington opponents flooded over to show support before he was driven off.

A knee injury to the No. 1 pick and franchise quarterback not only contributed to the Bengals' 20-9 loss Sunday but derailed their season built around giving Burrow as many snaps as possible.

“Thanks for all the love,” Burrow tweeted. "Can’t get rid of me that easy. See ya next year."

If that's indeed it for Burrow's rookie season, he was 264 of 404 for 2,688 yards and 13 touchdowns in 10 games. He had 203 yards and a TD pass in putting Cincinnati ahead of Washington before getting hurt.

Burrow had been sacked 32 times this season, but this injury happened after he got rid of the ball. Washington linemen Montez Sweat and Jonathan Allen hit Burrow high and low, and the QB's left leg bent the wrong way.

“Seeing that sucks, especially when you know the person,” said Washington receiver Terry McLaurin, who played with Burrow at Ohio State. “One thing I do know about Joe, he’s a resilient guy. I’m praying for him. He’s a guy that when he gets knocked down, he comes back stronger.”

Not long after Burrow was taken off, the team ruled him out with a left knee injury, pressing 2019 fourth-round pick Ryan Finley into duty. Finley finished 3 of 10 for 30 yards and an interception in the final minutes that ended a long-shot comeback bid.

Taylor didn't put all the blame on Finley, saying the Bengals as a team didn't get the job done. Washington sacked Finley four times after not getting to Burrow once before halftime.

Burrow had been a bright spot Sunday and all season for the Bengals and the NFL. He entered with the third most completions and second most attempts in the league, most recently shaking off a gimpy ankle injured in a blowout loss to unbeaten Pittsburgh.

The Heisman Trophy winner and college national champion had, in Taylor's eyes, an innate ability to make players around him better. Burrow also threw just five interceptions, wasn't the reason Cincinnati is 2-7-1 and there was no hesitation from the coaching staff to keep him off the field.

“He showed that he was mentally ready to go right from the get-go," Taylor said. "He’s given us a chance in most of all these games. He’s done what he could do in the fourth quarter there to drive us down, and sometimes we just haven’t gotten the win. Got a lot of belief in Joe and whenever he’s back, we’ll be ready for him to come back.”

Taylor said the Bengals' objective was to try to continue to win games in Burrow's absence, starting with their next game against the New York Giants. But just like his injury deflated the team at Washington, it's likely to have a similar impact the rest of the season.

“He’s the heart and soul of this team,” defensive end Carl Lawson said. "There’s no doubt in my mind that dude is going to be OK.”