Settling down: Cards ask Simmons to focus on linebacker 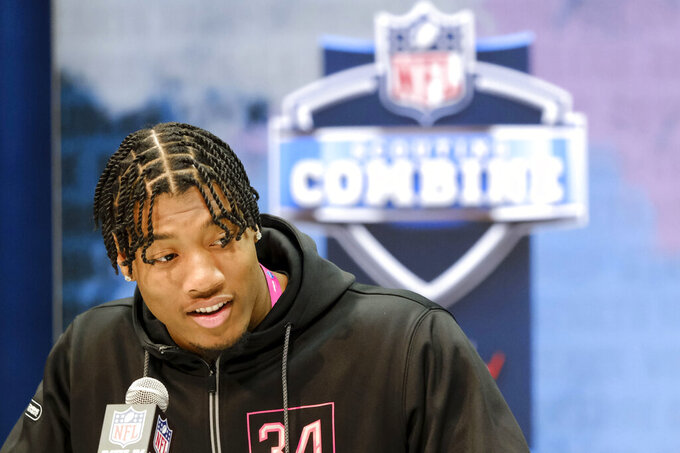 FILE - In this Feb. 27, 2020, file photo, Clemson linebacker Isaiah Simmons speaks during a press conference at the NFL football scouting combine in Indianapolis. Arizona Cardinals coach Kliff Kingsbury has raved about the Clemson star's versatility since he surprisingly landed in the desert after falling to the No. 8 overall selection. (AP Photo/AJ Mast, File)

Isaiah Simmons came to the Cardinals as a position-less prospect who appears ideal for the modern NFL.

Arizona coach Kliff Kingsbury has raved about the Clemson star's versatility since he surprisingly landed in the desert after falling to the No. 8 overall selection. His college game film was filled with tantalizing footage of a 6-foot-4, 238-pounder seamlessly switching between defensive end, linebacker, safety and even cornerback while being a big-play machine at all of them.

So it may come as a surprise that the Cardinals have asked Simmons to become a man ready to settle down — at inside linebacker. The 22-year-old seems more than happy to oblige.

“Everybody's paid to do their job out here," Simmons said. “So I don't know if I'm necessarily needed to do everything that I had to do in college.”

Simmons is expected to be one of the cornerstones for a defense the Cardinals hope is vastly improved this fall. Arizona gave up the most total yards in the NFL last season and struggled over the middle of the field, especially in coverage against tight ends.

Like all rookies, his initiation to the NFL has been strange because of the coronavirus pandemic. But Kingsbury said Simmons has the intelligence and physical ability to brush aside those challenges and become an immediate contributor in the middle of the field.

“Isaiah has been impressive since since we drafted him, in the meetings and his attention to detail and his retention of information,” Kingsbury said. “And they don’t make them much prettier when he walks in the building.

“It'll be fun to get him out there on the field and watch him run around soon.”

Star cornerback Patrick Peterson is also back for a full season after missing the first six games last year following a violation of the NFL's rules on performance enhancers. Linebacker Jordan Hicks returns after leading the team with 140 tackles.

That means Simmons can concentrate on the middle of the field. He admits that adjusting to the NFL has been a challenge, particularly with the distancing protocols because of the virus.

“It's a lot different than college,” Simmons said. “And just learning everything virtually as opposed to being hands on with everything and actually sitting in meetings is a little bit tougher. But at the same time, everybody is in the same position.”

Cardinals defensive coordinator Vance Joseph said the current NFL is so passing focused that it's hard to envision Simmons playing in the secondary on a regular basis, though his unique combination of size and quickness could make him useful in certain situations.

Joseph said the key is maximizing Simmons' versatility without overextending him, especially early in his career.

“Some of the things he did at Clemson are realistic, but some of the things won't be," Joseph said. "He's going to be a linebacker for us, have some special roles versus certain opponents we play, but I can't guarantee he's going to play corner for us or safety for us full time.

“But again, he's a 6-foot-4 guy who ran a 4.3 who has great lateral quickness and is so long. He can make up for some of the lack of quickness with his length. I wouldn't bet against him.”

While Simmons doesn’t mind concentrating on one position during his rookie season, he hasn't lost his desire for knowledge about how players at other positions are successful.

He said “there's always going to be small tidbits and techniques” that he can incorporate in his game. He cited linebackers Jones and Von Miller and defensive backs Jalen Ramsey and Tyrann Mathieu as players he enjoys watching on film.

“Any way I can help the team, I'm always up for it,” Simmons said. “If I get into a situation where I need to play more than one position, if that's what the coach wanted me to do, then that's what I would do. But as of right now I'm just inside linebacker, so that's what I'm focused on.”