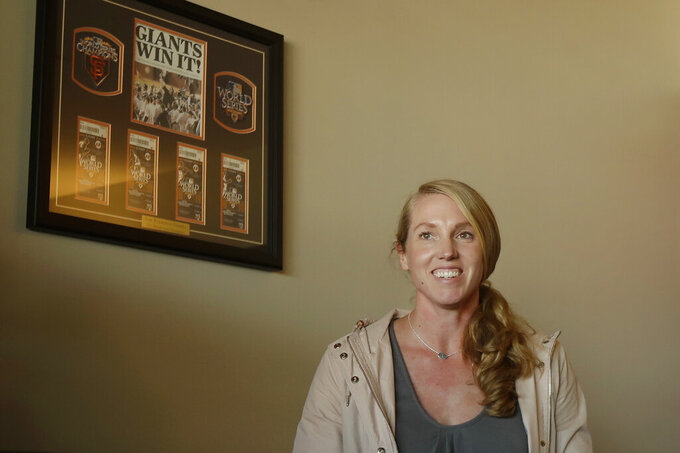 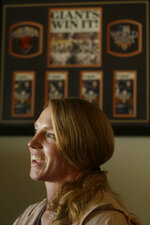 SAN FRANCISCO (AP) — Alyssa Nakken stole a quick glance out a window high above the ballpark toward McCovey Cove on a picture-perfect day and grinned.

She is honored to take on the challenge — and embrace the responsibility — of being the first female major league coach, having joined new San Francisco Giants manager Gabe Kapler's staff last month.

"I'm most comfortable at a baseball field,” she said.

It's a good thing, since she will be spending countless hours over the coming eight months in this very setting. Nakken will be in uniform and helping the Giants with everything from cage work to infield practice.

For Nakken, making history means being ready each day to make an impact in her own distinct way while ignoring the critics and anyone who figures she is unfit for an on-field baseball job based on her gender.

She does accept her role as an example for girls and women that they can work in baseball.

“It's a big deal. I feel a great sense of responsibility and I feel it's my job to honor those who have helped me to where I am," she said.

Kapler and Giants president of baseball operations Farhan Zaidi have all the confidence in Nakken's ability to help build clubhouse continuity through stronger bonds between young players and veterans.

"It was about, ‘Hey, we have a brand new staff, there’s a lot going on, we need somebody to come in here and make an impact in this clubhouse, for this staff, for the team and help us win, somebody who knows baseball, is a good communicator, can build relationships, can build trust and that's what it was about.'"

A polished speaker who has become adept at hiding any nerves, Nakken is taking initiative early. She put on a two-day coaches retreat this week that included a “culinary experience” — much more than “a food tour,” she said — through San Francisco's historic and diverse Mission District.

“For the record, I won the poker tournament,” she noted. She also got a shout-out from retired manager Bruce Bochy when they crossed paths Thursday. He is now a senior adviser for the franchise.

Nakken doesn't claim to be an expert on hitting or pitching. She plans to assist coaches on both sides, and will also work a lot on outfield defense and baserunning. Nakken will be in uniform but not in the dugout during games, rather working with players in the cage to keep them ready.

She's felt welcomed by players so far, with spring training set to start next week.

“I've been ready for a challenge like this, something new,” she said.

Cleveland Cavaliers assistant coach Lindsay Gottlieb, the former California women's basketball coach in nearby Berkeley, hopes Nakken paves the way for more women to work in prominent baseball jobs — and not just behind the scenes.

“That’s great news for the Giants and for baseball,” Gottlieb said. “Any organization benefits from diverse opinions and experiences, and baseball is no different. I don’t know Alyssa but I’m sure she’ll be a fantastic addition to the Giants staff, and that in turn should make the hiring of women and baseball something every team considers to ensure they have the strongest possible staff.”

The NBA has several female assistant coaches. The NFL's San Francisco 49ers, who lost to Kansas City in Sunday's Super Bowl, have Katie Sowers as an offensive assistant. Sowers became the first woman and openly gay coach to work at a Super Bowl.

At Sacramento State from 2009-2012, Nakken was a three-time all-conference player at first base and four-time Academic All American. She went on to earn a master’s degree in sport management from the University of San Francisco in 2015 — after interning with the Giants' baseball operations department a year earlier.

The idea of working with USF's baseball program helped draw her to the city and to pursue this career path.

Nakken is ready to get to work.

“In terms of this setting, I love what I'm doing," she said, “and I love this position that I'm in."