Shepard and Slayton iffy, Giants Golladay needs to step up 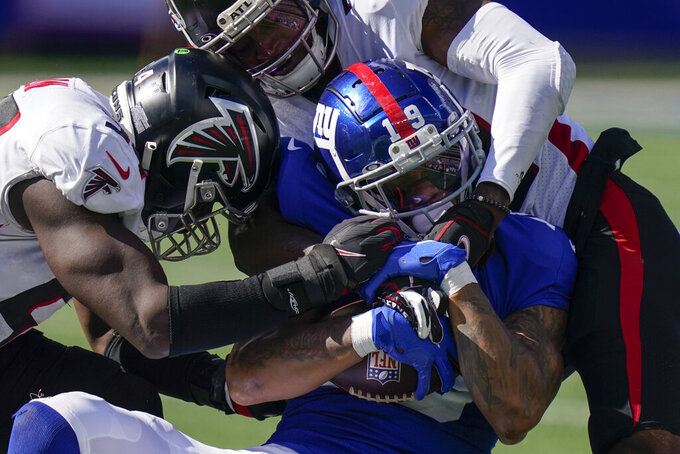 EAST RUTHERFORD, N.J. (AP) — When the New York Giants forked over $72 million to wide receiver Kenny Golladay early in free agency, the expectation was they were finally getting the playmaker they needed on the outside.

When healthy, Golladay was Matthew Stafford's go-to guy on the Detroit Lions. The 28-year-old wideout had 21 touchdown catches in 47 games, averaging a score every 15 targets.

The return on the dollar hasn't matched the expense yet as the Giants (0-3) prepare to travel to New Orleans (2-1) for a game on Sunday.

“Our back is against the wall right now, pretty much,” Golladay said Wednesday. “We’ve just got to keep fighting. We’re on Week 4 right now. We’ve still got a lot of ballgame left. To be honest, it’s a challenge each and every week, but at the end of the day, we’ve got to go out there and play our game.”

Golladay has been playing catch-up this season. He was limited to five games in 2020 by hip and hamstring injuries. He missed almost all of training camp last month because of another hamstring problem and it was followed by a hip issue, not on the same side as 2020.

While he has not missed any regular-season games, Golladay is off to a slow start. He has 11 catches for 166 yards and no touchdown this season. His average of 15.1 yards is slightly lower than his career mark (16.8).

He also had a sideline blowup with offensive coordinator Jason Garrett on Sept. 16 late in a game against Washington. Both men called it a heat of the moment tiff and shrugged it off.

With the Lions, Golladay made catches that covered big chunks of yardage. His longest reception with the Giants has been 19 yards. He could not explain the lack of big plays and avoided answering when asked if the Giants had him running different routes than in Detroit.

The Giants will need more from him, especially with fellow starting receivers Sterling Shepard and Darius Slayton very iffy after injuring their hamstrings last weekend.

“I’m not feeling it as pressure at all,” Golladay said. “I’ve been in situations where receivers have gone down. At the end of the day, I’ve still got to do my job. That’s make plays. I’m not going to do more than what I’m asked to do.”

What the Giants need to do as a team is score more touchdowns. They have five this season, and they are tied for 30th in the league in red-zone efficiency, converting 33.3%.

“At the end of the day when you look at the game, (there are) plays in there that we kind of are shooting ourselves in the foot a little bit. That all just comes down to execution. We have to be better,” Golladay said.

NOTES: ILB Blake Martinez was placed on injured reserve. He tore an ACL on Sunday. ... WR John Ross, who has been on IR with a hamstring injury for a month, was on the field. The Giants have three weeks to activate him. ... LG Ben Bredeson has a hand injury and his status for Sunday is uncertain. ... The Giants terminated the practice squad contracts of WR Matt Cole, T Foster Sarell and DT Willie Henry. They signed LB Omari Cobb and G Sam Jones to the practice squad.