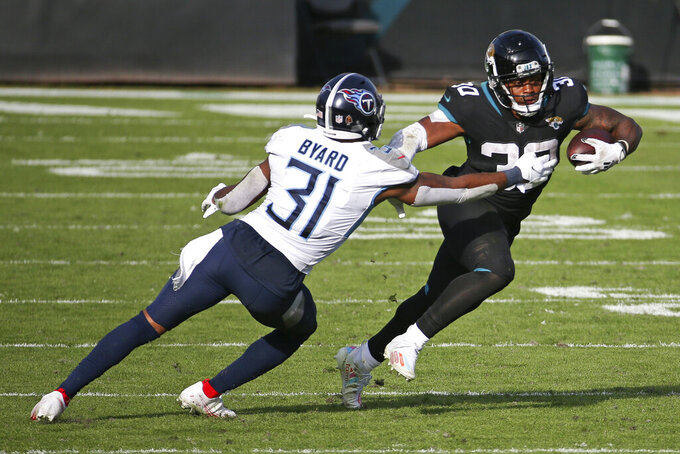 Jacksonville Jaguars running back James Robinson, right, gains yardage as he tires to get past Tennessee Titans safety Kevin Byard (31) during the second half of an NFL football game, Sunday, Dec. 13, 2020, in Jacksonville, Fla. (AP Photo/Stephen B. Morton)

The Baltimore Ravens left Cleveland on Monday night riding a wave of emotion following a thrilling victory that greatly enhanced their playoff hopes.

The Ravens would love to savor the memory of Lamar Jackson coming off the bench to throw a pivotal fourth-down touchdown pass before setting up Justin Tucker for a 55-yard winning field goal. Unfortunately, time does not wait for an NFL team in its pursuit of a spot in the postseason.

As it stands now, Baltimore (8-5) is not among the three wild-card AFC teams. So if the Ravens experience a letdown Sunday against the lowly Jacksonville Jaguars (1-12), then Jackson's heroics in that epic 47-42 win over the Browns could turn out to be meaningless.

“These are professional players, and they understand that to make the last win matter, you have to win the next one," Ravens coach John Harbaugh said. “Otherwise, you just negate the last win. That’s how it works, even with a big win like that."

Seems as if his players understand that philosophy.

“We can’t just be sitting back like we just won the Super Bowl, because we didn’t,” Jackson said.

The Ravens consider the last three games on their schedule to be playoff games, even this one against a team that has lost 12 straight and started three quarterbacks in an effort to tack on a victory to the one over Indianapolis way back in September.

Defensive end Calais Campbell played three seasons for Jacksonville before being traded to Baltimore last March. The reunion with his former teammates is secondary to the task at hand for his current squad.

“You can’t let a game like this go and expect to go to the playoffs," Campbell said. “So, first things first, I want to win to make sure that we give ourselves the opportunity to go to the postseason."

The Jaguars haven't won a game on the road since beating Oakland on Dec 15, 2019, and know breaking that skid against a peaking Ravens team will not be easy.

“I don’t know if it’s hitting their stride or just really executing on a real high level, both in the run game and in the pass game," coach Doug Marrone said of Baltimore.

Minshew Mania is back in Jacksonville, quite possibly for a limited time.

Quarterback Gardner Minshew will return to the starting lineup for the first time since Oct. 25. Minshew’s days in the spotlight could be numbered, though, considering Jacksonville is a virtual lock to draft a quarterback early in 2021.

Rookie Jake Luton started three games while Minshew was out with a thumb injury and Mike Glennon started the following three games. Minshew came off the bench last week and now is back atop the depth chart.

“Just glad to be back in the saddle,” said Minshew, who has 14 touchdown passes and five interceptions this season.

The Ravens have been hard hit by COVID-19, a trend that continued this week. Wide receiver Dez Bryant returned from the reserve/COVID-19 list Tuesday, but one day later three receivers were placed on tht list — including Marquise Brown, who caught a key touchdown pass in the fourth quarter against Cleveland.

It's possible the trio of receivers could be available Sunday if they test negative on a daily basis leading up to the game.

Jacksonville’s James Robinson can break the NFL record for rushing yards by an undrafted rookie with a solid game Sunday. Robinson has 1,035 yards on the ground and needs 70 to pass Indianapolis’ Dominic Rhodes for the most in league history. Rhodes ran for 1,104 yards in 2001.

Robinson became the fourth undrafted rookie and the fastest to reach the millennium mark last week. He needs 189 more yards rushing in the final three games to break the franchise’s rookie record (1,223) set by Fred Taylor in 1998.

Brown can only hope to be healthy Sunday, because Jacksonville has struggled to cover top receivers in recent weeks. Tennessee’s A.J. Brown had seven receptions for 112 yards and a touchdown last Sunday, a week after Minnesota’s Justin Jefferson had nine catches for 121 yards and a score.

Adding to Jacksonville’s woes: starting cornerback Tre Herndon was placed on the COVID-19 list Wednesday and might not make the trip.