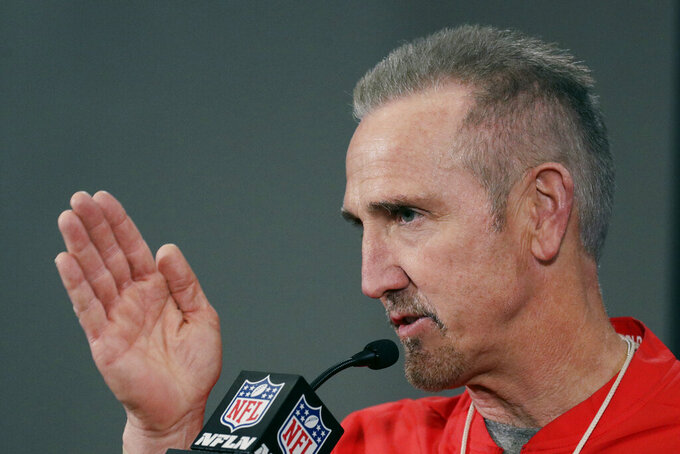 FILE - Kansas City Chiefs defensive coordinator Steve Spagnuolo addresses the media during a news conference at Arrowhead Stadium in Kansas City, Mo., in this Thursday, Jan. 16, 2020, file photo. All four defensive coordinators who will be trying to shut down high-powered offenses in the NFL playoffs this weekend have been head coaches before, providing valuable experience in the conference championships. (AP Photo/Charlie Riedel, File)

KANSAS CITY, Mo. (AP) — Rarely does Tom Brady allow his mind to wander back to the Super Bowl following the 2007 season.

Steve Spagnuolo is a big reason why.

The Patriots had rolled to the championship game in search of perfection, and their star quarterback had been the embodiment of their success. Brady had dominated defenses all year, including the one Spagnuolo coordinated for the New York Giants in their regular-season finale, and few thought anything would be different in the big game.

Well, the Giants wound up sacking him five times. Spags' game plan held Brady to 266 yards passing, his second fewest of the season, and the Patriots to a season-low point total, allowing New York to triumph 17-14 in Arizona.

“That game," Brady said Monday, “is one of my least favorite football memories.”

He hopes he can reflect on Sunday with a bit more joy.

Brady will once again lead his offense against Spagnuolo's defense, only this time it will be his Tampa Bay Buccaneers facing the defending champion Chiefs in the Super Bowl. It also will be a rematch of a game earlier this season, when once more Spagnuolo kept Brady off balance as Kansas City coasted to a 27-24 victory in Tampa Bay.

“Spags runs a great scheme and I think he really caters to the strength of his players," said Brady, who finished with 345 yards passing, three touchdowns and two interceptions in Week 12 — though most of those numbers, including a pair of TD passes, came in the closing minutes with the game mostly out of reach.

“I think his scheme has evolved and I've played him several times over the last 13, 14 years,” Brady continued. “He's a tremendous coach and everybody seems to love to play for him. It's a tough game. I know he'll have those guys ready.”

That's precisely why he was hired.

The Chiefs had gone just about as far as Bob Sutton could take them when they reached the AFC title game a couple of years ago. They had built a dynamic offense around Patrick Mahomes and were solid on special teams, but their defense languished well behind — they finished 24th in points and 31st among 32 teams in yards allowed.

It was never more evident than in that conference championship game against — coincidentally enough — Brady and the Patriots. He threw for 348 yards, his offense held the ball an astounding 44 minutes, and after winning the overtime coin flip they never gave Mahomes and Co. a chance with the ball in marching for the winning touchdown.

Sutton was fired. Spagnuolo was hired.

The difference was immediate.

With his new 4-3 scheme and a seemingly unending package of blitzes, Spagnuolo's defense climbed to seventh in points and 17th in yards last season. It was a big reason why the Chiefs were able to return to the Super Bowl for the first time in five decades, and the job they did against San Francisco was a big reason why they ultimately won the title.

“As a player," Chiefs defensive end Frank Clark said, "all you want is a coach like Coach Spags, a players' coach — someone who understands you and wants to put you in the best position so you can help your team win football games.

His system has allowed Clark to take his game to a new level. The same for Tyrann Mathieu, the talented safety whom the Chiefs signed in free agency, and who has turned in back-to-back All-Pro seasons as the anchor of their secondary.

"They do a great job disguising," said Bills coach Sean McDermott, whose team was beaten by Kansas City in the regular season and again in the AFC title game.

“I was around Spags in Philadelphia, and that's probably where one of the things he taught me was the disguise — the way we used to disguise Brian Dawkins, and the safeties that played alongside.”

Mathieu has taken on the same role in Kansas City, and in some ways he's a microcosm of Spagnuolo's entire system.

He lines up in center field, where he picked off a career-high six passes in the regular season and another in the playoffs. He walks into the box to help with run support and blitz the quarterback. And he covers slot receivers in a pinch.

All traits that Mathieu shares with the entire Chiefs defense.

“I think each and every week we try our best to go out and really compete at a high level,” said Mathieu, who admitted that his fit in Spagnuolo's defensive scheme could not be more perfect. “At the end of the day, especially when you get into the postseason, it's about which team has the best defense on the field.”