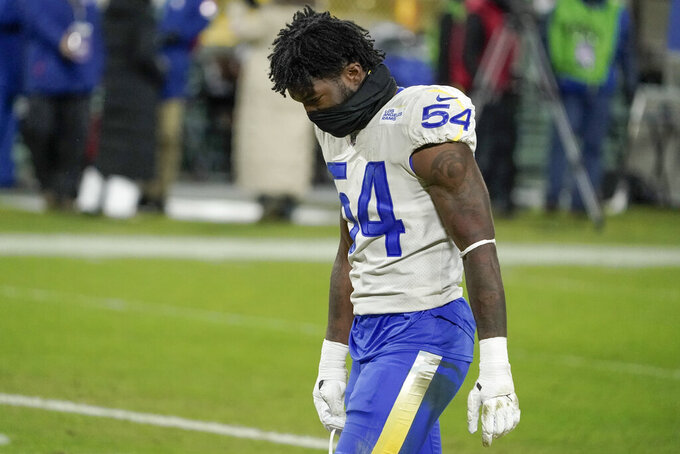 LOS ANGELES (AP) — The Los Angeles Rams' surprisingly successful season hadn't even been over for a full day before the task of building on it got exponentially tougher.

Brandon Staley's crosstown departure Sunday for the top job with the Los Angeles Chargers left the Rams looking for the third coordinator in three seasons for their No. 1-ranked defense.

The Rams also face the likelihood of significant free agent losses for the second straight offseason as the bills on their top-heavy roster come due, and Jared Goff's second straight year of middling play has put his job into question despite his $134 million contract kicking in next season.

Sean McVay looked like a man who could use a rest after the Rams (11-7) ended his fourth straight solid campaign with a 32-18 loss at top-seeded Green Bay.

Instead, the head coach has plenty of work to do this month, starting with his search for Staley's replacement.

"Everybody is earning their spots,” said McVay, who will reach his 35th birthday Sunday as the ninth-longest-tenured head coach in the NFL, one day behind Buffalo's Sean McDermott for eighth.

“I think that’s something that we want to continue to try to really create, to make sure the competition is present and relevant in everything that we do," McVay added. “I’m looking forward to attacking that opportunity, but also catching our breath and taking a step back as well.”

McVay likely won't be able to step back until he chooses a successor for Staley, his third former assistant to be given an NFL head coaching job in less than two years. That's the price for McVay's impressive success in Los Angeles while leading the Rams to four straight winning records and three playoff berths since 2017.

But McVay is likely to be tempted to go outside the organization again to find another up-and-coming coach like Staley — and like himself a few years ago — who only needs the chance to do something special.

McVay repeatedly made a clear point in his end-of-the-season news conference: No player's job is safe.

When asked specifically about his highest-paid players, McVay confirmed he's including Goff, whose lavish four-year contract extension is slated to pay him more than $34 million next season.

“Everything is being evaluated,” McVay said. “I’m not ready to make any sort of statements with regards to anybody. Starting position or not, we’re going to have a level of competition at everything that we do.”

The possibility of not playing somebody making as much money as Goff is ludicrous, which indicates the Rams must be at least thinking about trading or cutting their 2016 No. 1 draft pick, even if the resulting cap hit would be crippling for another year or two.

Goff has earned two Pro Bowl selections and passed for 17,082 yards with 102 TDs and 53 turnovers in his four seasons under McVay. Yet few consider the fifth-year pro to be a top-tier NFL quarterback — particularly after the past two seasons, which he acknowledges weren't up to his prior standard.

McVay had expressed unerring support for Goff throughout his tenure until the past three months. It could be part of McVay's strategy to motivate better performances out of an inconsistent pro, or it could be foreshadowing to the Rams' next major roster move.

Goff isn't the only player with an uncertain future. The Rams could lose several important players to free agency, including John Johnson, their hard-hitting safety and defensive signal-caller. Johnson, who has made just over $3.2 million in his four-year NFL career, deserves a significant raise that Los Angeles might not be able to give him.

Johnson immediately thought about the uncertainty on the field in Green Bay, thanking several teammates for their friendship.

“I might have shed a few tears, but I’m glad I got it out on the field and not where anybody could see me,” Johnson said. “Definitely emotional, just not knowing what’s going to happen, not knowing if the guys you’ve been with for four years, if you’re going to be with them again. So I guess we just go from here and see how it goes.”

Replacing that talent won't be easy: For the fifth straight offseason, the Rams don't have a first-round pick.

Staley might not be the only coach departing: McVay also could lose Kevin O’Connell, his first-year offensive coordinator. O’Connell seems a logical candidate to join Staley with the Chargers, or he could follow Matt LaFleur’s career path and move on from McVay’s offense to somewhere he gets to call the plays, improving his own head coaching prospects.

Special teams coach John Bonamego’s job also is likely to come under scrutiny after the Rams' units regressed in most areas. Special teams didn’t stabilize until the Rams signed Matt Gay, their third kicker of the season.