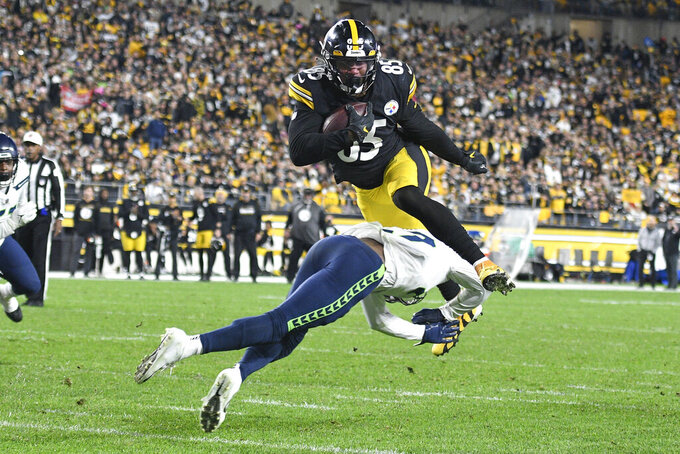 Pittsburgh Steelers tight end Eric Ebron (85) leaps over Seattle Seahawks defensive back Marquise Blair (27) on his way to a touchdown after caching pass during the first half an NFL football game, Sunday, Oct. 17, 2021, in Pittsburgh. (AP Photo/Don Wright)

PITTSBURGH (AP) — The Pittsburgh Steelers will be without tight end Eric Ebron and outside linebacker Melvin Ingram when they travel to Cleveland to face the Browns on Sunday.

Ebron's absence figures to provide even more playing time for rookie Pat Freiermuth. The second-round pick has 18 receptions for 158 yards and a touchdown through six games and had become the de facto starter, though the Steelers had been listing both as co-starters on the depth chart.

Ingram, signed to a one-year deal just before training camp after spending nine seasons with the Los Angeles Chargers, had played sparingly of late behind starters T.J. Watt and Alex Highsmith.

Derrek Tuszka, signed to the practice squad on Sept. 1 before being promoted to the 53-man roster on Sept. 28, will be the primary backup at outside linebacker.