Steelers' Heyward: team will be united if it opts to protest 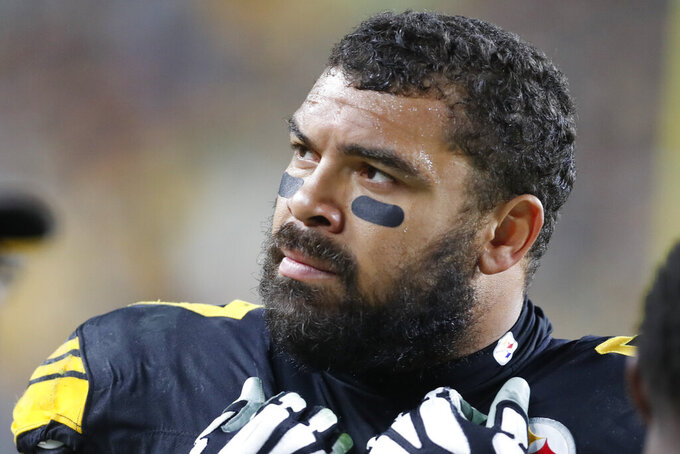 FILE - In this Oct. 28, 2019, file photo, Pittsburgh Steelers defensive end Cameron Heyward stands on the sidelines during the first half of an NFL football game in Pittsburgh. Heyward isn't sure what his future holds. The club hasn't contacted the Pro Bowler about an extension as he enters the final year of his current deal. (AP Photo/Keith Srakocic, File)

PITTSBURGH (AP) — Cam Heyward is well-versed in the sometimes messy optics associated with taking a stand against social injustice.

The Pittsburgh Steelers defensive end and his teammates met it head on in 2017, when a miscommunication with left tackle and Army veteran Alejandro Villanueva left Villanueva on the field in Chicago for the national anthem while the rest of the Steelers remained in the tunnel. The image — Villanueva with his hand over his heart, the other 52 players on the roster hidden in darkness — became a flashpoint in the debate on what is and what isn't the proper way to protest.

“Thing that ticks me off about that, what we were trying to do was remain out of the spotlight and it got turned upside down," Heyward said Thursday. “To know that we were looked at as leaving one of our brothers out and leaving Al out to dry (hurts).”

Heyward isn't concerned about the Steelers making that mistake again as they prepare for a season unlike any other. The wave of high-profile nationwide protests in the aftermath of the killing of George Floyd by a Minneapolis police office has professional athletes once again trying to piece together how to use their platform to bring about change.

While Heyward, a nine-year veteran and longtime defensive captain, stressed everyone has a voice in the locker room, he expects any public display by the team on the field to be one of togetherness.

“I think we want to stay united in what we do and what we want to accomplish,” Heyward said. “Coach (Mike Tomlin) has always told me if we win the Super Bowl, that’s not enough in the city of Pittsburgh. We want to leave lasting change among the community as well. For us, we’re going to have those opportunities to branch out and be individuals and affect our community (off the field)."

Heyward is confident the climate in 2020 is more open to honest dialogue compared to 2017, when Kaepernick's taking a knee to call attention to police brutality turned into a referendum on whether it's appropriate to make that kind of stand during “The Star-Spangled Banner.”

“It was harder (in 2017) because I felt like ... no one really paid to the issues Colin was talking about at the time and they were mostly concerned with what he was doing rather than his message,” Heyward said. “I think this time around you see the evidence and you see what he was talking about. It’s not like he was blowing up smoke. These are real issues that effect our communities and this is a chance for a lot of guys to speak up. We all have backgrounds and we’ve all seen these tragedies happen. They’ve got to stop.”

The 31-year-old Heyward, a married father of three whose wife is white, added "these issues hit home way more because my family is going to have to deal with it for the rest of their lives.”

Heyward called for more resources for law enforcement officers and having a national database that can track complaints against officers.

While Heyward, who said he is in contact with his teammates every day, is confident social progress can be made — pointing to the Steelers' decision to close their offices on Friday in honor of Juneteenth — he's a little less certain about how the NFL moves forward amid the Covid-19 pandemic. He is entering the final year of his contract and though he wants to remain in Pittsburgh there hasn't been much movement when it comes to a possible extension.

“If I have to go into this year thinking it should be my last year, so be it,” Heyward said.

Either way, 2020 feels like a last ride of sorts. Several younger players — namely linebacker T.J. Watt and wide receiver JuJu Smith-Schuster — will be in the market for raises soon. Quarterback Ben Roethlisberger is playing on a rebuilt right elbow at age 38. For a team that's missed the playoffs each of the last two seasons, Heyward has become acutely aware of a window potentially closing.

“We know this team is not going to be the same next year,” he said. “I stress that a lot. ... We’ve got a great group of guys but some guys have outplayed their contracts and have to move on to greater pastures. That’s just how the game is ... I want everybody to get paid as much as they can ... whatever this last hurrah is we’ve got to be ready for it.”

What that last hurrah looks like remains to be seen. The NFL and the NFL Players Association are still ironing out the details on how teams can safely get back to business. Heyward, an asthmatic, admits he's still not sure how it's going to work.

“I know the NFLPA and the NFL have been working on this for a while," Heyward said. “There’s so many different parts that have to be clear before me and my family feel comfortable about me playing.”

The Steelers are scheduled to play in the Hall of Fame Game in Canton in early August. Heyward doesn't see it happening.

“The Hall of Fame Game is probably out," he said. “We talk so much about safety and how, why would we want to expose two teams to an extra game a week early?”