Steelers to lean on veterans, youth to fill secondary void 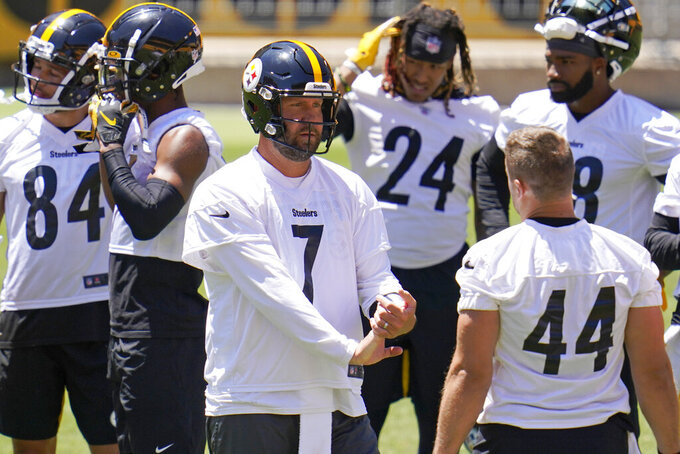 But the Steelers feel that the return of veteran leaders Joe Haden, Minkah Fitzpatrick and Terrell Edmunds, and the emergence of younger players like Cam Sutton and Justin Layne can effectively fill the void in a new-look secondary.

“I know we lost (Nelson) and (Hilton), but when you think about it, (Haden), Minkah and (Edmunds) will be playing their third year together, and I think that’s super important,” Steelers’ secondary coach Teryl Austin said Wednesday during the team’s second day of minicamp. “Anyone new that comes in here, that veteran leadership is really important when you have turnover because they help the new guys understand the expectations and what it means to play defense here in Pittsburgh.”

The Steeler defense ranked as one of the best in the NFL last season, finishing No. 3 overall and against the pass. Hilton signed with Cincinnati as a free agent and the Steelers released Nelson in a salary cap-related move, as the team opted to cut the veteran cornerback rather than trade him.

“I was a little surprised, but obviously it’s a business thing,” Haden said about Nelson’s release. “When you have so much talent on one team, sometimes you can’t keep everyone.”

Haden and Nelson became one of the league’s top cornerback tandems and one of the reasons the Steelers finished top five in total defense the previous two seasons. But Haden said that Nelson’s departure creates opportunity for players like Sutton and Layne, in addition to Antoine Brooks, the team’s 2020 sixth-round pick, and James Pierre, who made the team last season as an undrafted free agent.

Pierre came up with two interceptions on Wednesday, both against veteran quarterback Ben Roethlisberger, including one during the two-minute drill. Pierre said Roethlisberger congratulated him after practice.

“Ben is not just throwing anyone the ball,” Pierre said. “It’s precious to get one of those. He’s throwing deep and throwing away from you, so it’s hard to get it from Ben. When I got those, it made me smile.”

The versatile Sutton has made a name for himself by filling a variety of roles since the Steelers selected him in the third round of the 2017 draft. Layne, a third-round pick in 2019, played in 16 games, but made no starts last season for the Steelers. He had 10 tackles on defense and 12 on special teams, but was arrested in April on a gun charge following a traffic stop, to which he later pleaded guilty to misdemeanor offenses.

Sutton, who signed a two-year deal worth $9 million during the offseason, took a significant step forward in 2020. He was a consistent contributor both in the slot and on the outside, and he finished with one interception, a sack and three fumble recoveries in six starts.

Austin said that Sutton has been working on the outside recently at practice.

“I know Cam can play inside,” Austin said. “We’re letting these other guys work inside to see what we have. I know for a fact that Cam would not need a lot of reps if we had to move him inside to help us.”

Hilton had a unique skillset in the slot as a cover corner and a pass rusher. He has seven career interceptions and his 9.5 sacks, 30 tackles for loss and 23 quarterback hits all rank second among defensive backs since he entered the league.

The Steelers want to fill the void left by Hilton’s departure with a similar nickel cornerback who is physical and strong against the run, with additional capabilities to blitz and cover quick slot receivers in open space.

“The guy has to be part cornerback, part linebacker, and if he’s not a good blitzer, that limits you in terms of some of the things scheme-wise that you can do,” Austin said. “We know he won’t be Mike, but he has to do similar-type things. The way the game is being played, that third guy inside is a starter, and he’s just as valuable as any guy outside. Whoever ends up being there, has to be a valuable part of our defense.”

NOTES: Roethlisberger returned to practice on Wednesday, while WR JuJu Smith-Schuster sat out. Both left early on Tuesday. … Tight end Eric Ebron was among those absent from the team’s second minicamp practice. Head coach Mike Tomlin said all absences were excused.

By Dennis Waszak Jr. 58 minutes ago
an hour ago
By Kyle Hightower an hour ago
By Schuyler Dixon 2 hrs ago
By Noah Trister 3 hrs ago