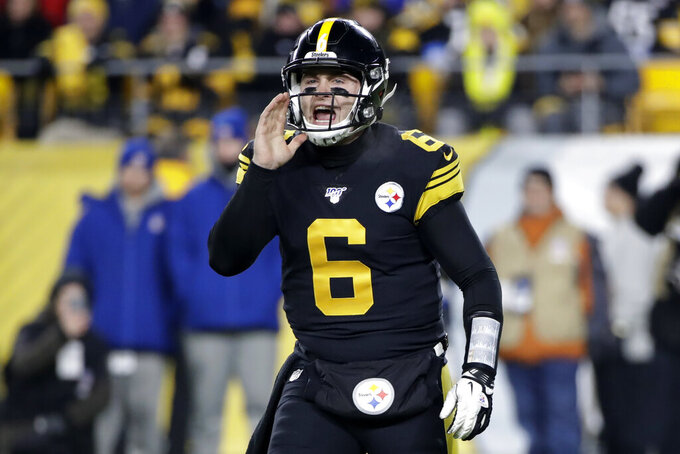 EAST RUTHERFORD, N.J. (AP) — The Pittsburgh Steelers hold their playoff destiny in their own hands.

Win the last two games of the season, and they're in. No sweating, no scoreboard watching.

That's why the Steelers' game Sunday against the New York Jets at MetLife Stadium has taken on an almost playoff-like feel. Lose this one, and the path to the postseason gets a whole lot tougher.

“That is what you work all year for, that clarity, that ticket to the tournament, the finality of it all," Steelers coach Mike Tomlin said. “The scarcity that is in our game, I just appreciate that. You don’t get 80-plus opportunities to state your case. You don’t get 160. You get 16 opportunities, one a week, over the second half of a calendar year to state your case and we are in December, so that says it all."

The Steelers (8-6) certainly didn't help themselves in a 17-10 home loss to Buffalo last week that has them in this delicate position. Devlin “Duck”Hodges threw four interceptions in that one, but Tomlin is sticking with the rookie quarterback to face the Jets (5-9).

A loss would not eliminate Pittsburgh, but it would then need some major help — especially with a regular-season finale at Baltimore up next.

Meanwhile, the Jets can play the spoiler role this week, and then finish the season at Buffalo against their AFC East rivals. So, New York isn't content with simply playing out the string.

“Everybody in here is treating these last two games like playoff games," safety Jamal Adams said. “We're out for war. The atmosphere is going to be fun. I know they're going to bring a lot of fans, so I'm looking forward to it."

The obvious storyline in this one is Jets running back Le'Veon Bell facing his former team for the first time since signing a four-year, $52.5 million deal with New York in the offseason.

Bell made the Pro Bowl three times with the Steelers and established himself as the game's most versatile running back, but sat out all last season in a contract dispute with Pittsburgh.

While many of Bell's Steelers teammates understood the business side of things, there were some who grew frustrated with the situation. A year later, Pittsburgh players insist they harbor no ill will toward Bell.

“I’m telling you, man, we love Le’Veon, at the end of the day," Steelers center Maurkice Pouncey said. “So that outside world can think whatever they want, but everyone in this locker room loves and respect him. And if he was still here, we would be riding with him."

After sitting out the first two games of his NFL career with a sprained ankle, Adams appears set to play against the Steelers.

The Jets' defensive leader was selected for his second straight Pro Bowl after promising after his rookie season that he'd never miss another. He has been right on with that prediction, and he has another goal in his sights.

Adams has 6 1/2 sacks this season, just two away from breaking the NFL mark for a defensive back set by Arizona's Adrian Wilson in 2005.

A big part of Pittsburgh’s issues against the Bills stemmed from the decision to abandon the run despite the return of starting running back James Conner from a shoulder injury.

The Steelers ran just 15 times for 51 yards, dropping them to 3-6 when they finish with under 100 yards on the ground. The sledding figures to be tough again against the Jets, who are allowing just 88 yards rushing per game.

Pittsburgh relied heavily on a “committee” approach during Conner’s absence and it stayed that way against the Bills, with four backs getting at least one carry. Conner isn’t campaigning for an expanded role.

“If that’s how the game goes, I’ll be ready for whatever,” Conner said. “Just got to execute.”

The Jets have struggled protecting the quarterback no matter who is under center. Now they face a defense that’s tied for the NFL lead in sacks (49) and ranks second in takeaways (35).

Pittsburgh outside linebackers T.J. Watt and Bud Dupree are one of only two linebacker duos in the NFL to get at least 9 1/2 sacks, with the other being Green Bay's Preston Smith and Za'Darius Smith. After rotating at the position frequently earlier in the season, Watt and Dupree’s workload has increased in recent weeks, and that’s by design.

The Jets are struggling through their fourth straight losing season, something the franchise hasn't experienced in the Super Bowl era.

They're looking to avoid having double-digit losses in four consecutive years for the first time in team history. New York also won't make the playoffs for the ninth straight season, the franchise's second-longest drought. Only the 1970-80 Jets went longer without reaching the postseason.