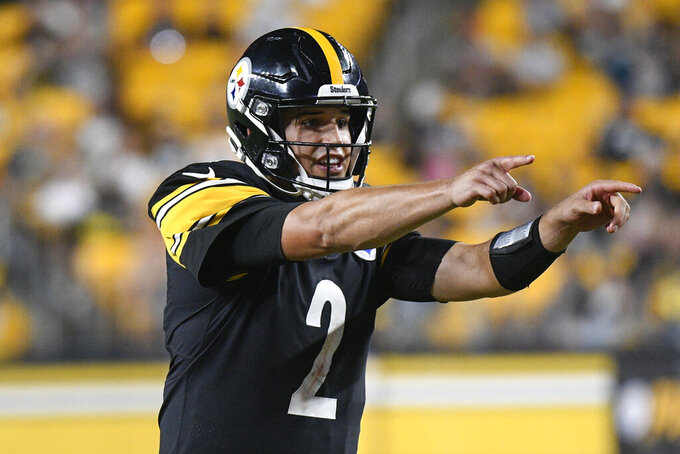 Pittsburgh Steelers quarterback Mason Rudolph calls signals during the second half of the team's NFL preseason football game against the Detroit Lions on Saturday, Aug. 21, 2021, in Pittsburgh. (AP Photo/Don Wright) 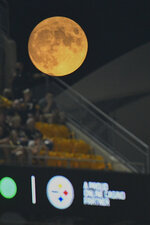 Roethlisberger turned in a perfect passer rating of 158.3 and led the Steelers’ first-team offense to a pair of touchdowns and Pittsburgh defeated the Detroit Lions 26-20 on Saturday night.

“I'm just trying to win a football game,” Roethlisberger said. “It's the preseason and I wanted to stay healthy. It was good to be out there and playing.”

Roethlisberger had his initial opportunity to work with first-year offensive coordinator Matt Canada during an in-game setting.

The 39-year-old Roethlisberger ran Canada’s up-tempo approach to near perfection in three series. He finished 8 of 10 for 137 yards and two touchdowns, both to rookie tight end Pat Freiermuth.

Mason Rudolph followed and led Pittsburgh to three field goal drives, going 13 of 18 for 138 yards. Dwayne Haskins led the offense to another field goal, as the Steelers scored on six of their first seven possessions.

The Lions sat several regulars, including quarterback Jared Goff, who was acquired as part of the Matthew Stafford trade. Tim Boyle got the start under center on Saturday and the Lions weren’t able to cross midfield until late in the third quarter.

“Obviously, we didn't have a few guys go, but we can't lean on that as a crutch,” Boyle said. “We should've done a better job in the first half of executing, there's no way of getting around that. I'm not extremely pleased with how we played in that first group.”

Roethlisberger was 4 of 5 on third down attempts. His lone misfire came on the Steelers’ opening drive when the 18-year veteran stepped up in the pocket and rolled out to elude pressure, but tight end Eric Ebron couldn’t come up with the first-down grab.

Roethlisberger converted all three third down attempts on the Steelers’ first touchdown drive. Roethlisberger aired out a 43-yard deep ball to Diontae Johnson on third-and-3 and got Lions safety Tracy Walker to bite on a hard pump fake before his first touchdown to Freiermuth in the back of the end zone.

Roethlisberger was successful on his lone third down attempt during the Steelers’ third drive. He found Freiermuth, the Steelers’ second-round pick from Penn State, who made a leaping grab in the back of the end zone for his second touchdown of the game.

“When the ball comes my way, I have to make plays,” Freiermuth said. “That's why they drafted me where they did. I'm just going to continue to make plays.”

Harris’ biggest play came on the third series. Roethlisberger hit Harris with a short pass and the rookie turned it into a long gain, as he outraced Lions linebacker Jahlani Tavai to the sideline for a 46-yard pickup, setting up Pittsburgh’s second touchdown.

In his rookie season, Harris, a former Alabama standout, will be tasked with playing behind a revamped offensive line, while also helping to improve a rushing attack that ranked last in the NFL last season.

“I was excited to see Najee's catch-and-run,” Roethlisberger said. “I don't think his rushing numbers were great, but we didn't need it because we got to see him do other things.”

Canada is a believer of dictating and changing tempo in his offense and the Steelers dominated time of possession by a two-to-one margin in the first half against the Lions. They also outgained Detroit 285-65 in the first half.

Boyle, the Lions’ projected backup quarterback, played into the third quarter and finished 7 of 15 for 44 yards. Boyle started 2 of 7 for 14 yards with an intentional grounding, as the Lions punted on their first five possessions.

David Blough entered midway through the third quarter and finished 12 of 17 for 143 yards and a touchdown. He led the Lions to three fourth-quarter touchdown drives and tossed a score to McKinley in the corner of the end zone late in the game.

“I thought Blough led the team and gave us a chance to try and do something at the end of the game,” Lions coach Dan Campbell said. “Certainly, in the first half we have to clean a bunch of stuff up.”

Pittsburgh: at Carolina on Friday.