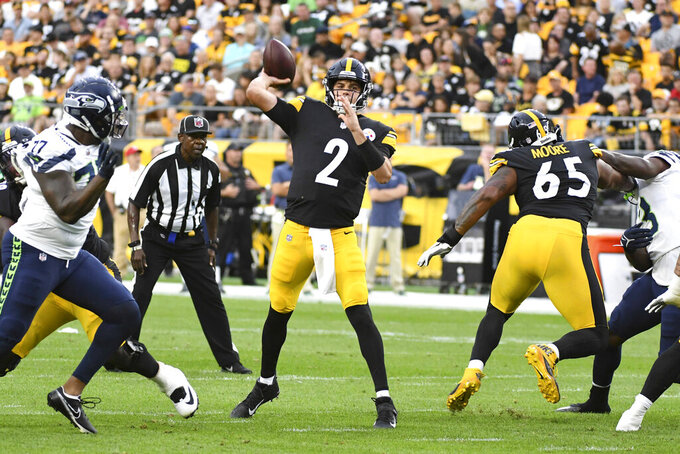 Mason Rudolph has spent the past five months saying all the right things. That he welcomes the competition with Mitch Trubisky and Kenny Pickett. That he is fine with having to show he is capable of being an NFL starter, not by default — as it was in 2019 — but by choice. That he is confident if he shows what he can do, everything will work out one way or the other.

Even now, with the days of training camp dwindling and with Rudolph increasingly looking like the odd man out of a three-man derby that's kind of never really felt like a three-'man derby, he is trying to remain upbeat.

“I wouldn't have it any other way,” Rudolph said Thursday. “You always have to prove yourself. Everybody's got to prove themselves. That's the nature of the league.”

The Steelers felt comfortable enough with Rudolph that they extended his contract through 2022 last summer, giving him a shot at taking over after Ben Roethlisberger's retirement. Yet that didn't stop them from signing Trubisky minutes into free agency in March or selecting Pickett with the 20th overall pick in the draft.

The team has a far greater investment in the new arrivals than Rudolph. Trubisky has spent the vast majority of his time working with the starters since organized team activities began in May. Pickett has quickly been embraced by fans won over by his surprising super-senior season at Pitt last fall, when he led the Panthers to the Atlantic Coast Conference title.

While head coach Mike Tomlin has been pathologically vague when assessing the quarterback competition heading into Sunday's preseason finale against Detroit, by all appearances it's going to come down to Trubisky and Pickett, with Pickett virtually assured of getting a shot at being “The Guy” at some point regardless of how Trubisky fares.

That leaves Rudolph seemingly playing for a roster spot — be it in Pittsburgh or elsewhere — this weekend. He's become well-versed in the vagaries of the business side of the NFL. He beat out Josh Dobbs for the right to serve as Roethlisberger's backup at the end of the 2019 preseason, then saw his good friend get traded to Jacksonville a couple of weeks later.

There's a very real chance that the snaps Rudolph gets on Sunday, however many there are — Tomlin has yet to delineate how he's going to split playing time between his three quarterbacks — could be his last in Pittsburgh. Yet, asked if he feels as if the preseason finale will be a chance to showcase himself to 31 other coaching staffs, the ever diplomatic Rudolph demurred.

“All I care about is this coaching staff right now,” he said.

Rudolph stressed he believes he's played well during training camp, and the numbers tend to back it up. He's completed 26 of 36 passes for 220 yards and two touchdowns without an interception and deftly led the Steelers to a pair of fourth-quarter scores last week against Jacksonville, including a perfectly executed 1-yard flip to Tyler Snead in the waning seconds.

The problem for Rudolph is that by the time he entered the game, Pickett had already presented a pretty compelling case he may be ready sooner rather than later. Rudolph's savvy play — admittedly against mostly third-stringers who could be looking for work in a way — was seemingly an afterthought.

Maybe it's fitting. In a way, that's been Rudolph's lot almost since the Steelers picked him in the third round of the 2018 draft. Tomlin and former general manager Kevin Colbert said at the time they had graded Rudolph out as a first-rounder. He struggled to play like it in 2019, when he was thrust into the starter's role after Roethlisberger shredded his right elbow in Week 2.

Rudolph endured the indignity of getting benched in favor of undrafted rookie free agent Devlin “Duck” Hodges, getting whacked with his own helmet by Cleveland's Myles Garrett in an ugly brawl in November, then being forced to fend of allegations by Garrett that he'd made a racist comment.

Through it all, Rudolph has attempted to stay even-keeled. Last year he was iffy at best in a 16-all tie against then-winless Detroit, an assignment he got less than 24 hours before kickoff after Roethlisberger tested positive for COVID-19. It may have been his last, best opportunity to prove he's one of the top 32 players in the world at his position.

Asked if he felt like the competition this summer has seemed as wide-open as Tomlin would like to portray it, the cool veneer of the player who admits he's his own biggest critic cracked just a bit while trying to come up with the politically correct answer.

He repeated the phrase “I think, you know” several times before settling on, “I’m going to keep competing til they tell me I can’t.”