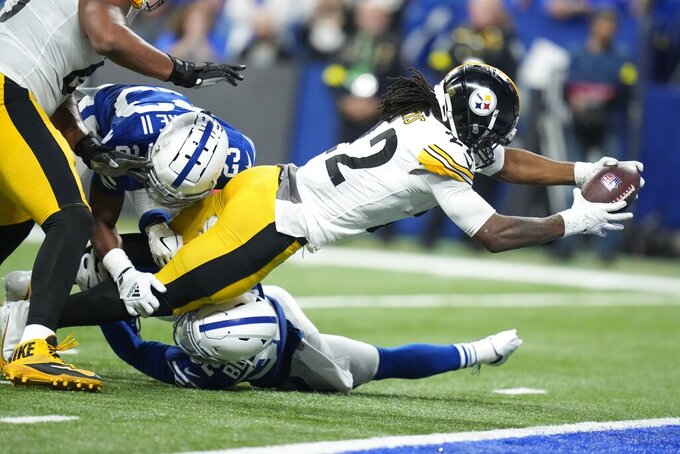 Pittsburgh Steelers' Najee Harris (22) dives in for a touchdown against Indianapolis Colts' Julian Blackmon (32) and Kenny Moore II (23) during the first half of an NFL football game, Monday, Nov. 28, 2022, in Indianapolis. (AP Photo/Michael Conroy)

PITTSBURGH (AP) — Pittsburgh Steelers running back Najee Harris did not practice on Wednesday, two days after sustaining an abdominal injury in a win over Indianapolis.

Harris went down late in the first half in a 24-17 victory over the Colts and did not return. Coach Mike Tomlin said Tuesday he didn't have specifics on the nature of Harris' injury, but said it was likely Harris would miss at least some portion of practice during the week.

Harris struggled early in the season, but has come on of late, picking up three touchdowns in his past two games.

While Harris' status is uncertain, primary backup Jaylen Warren should return after sitting out last week with a hamstring injury. Warren, an undrafted rookie free agent, practiced on Wednesday.