Steelers RB Harris says he expects to play against Pats 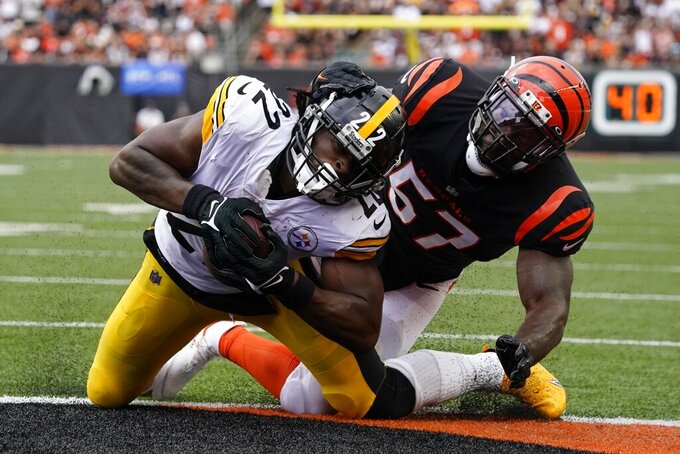 Pittsburgh Steelers running back Najee Harris (22) goes in for a touchdown while being tackled by Cincinnati Bengals linebacker Germaine Pratt (57) during the first half of an NFL football game, Sunday, Sept. 11, 2022, in Cincinnati. (AP Photo/Joshua A. Bickel)

Harris injured his left foot late in last week's 23-20 overtime victory over Cincinnati and was replaced by rookie undrafted free agent Jaylen Warren. Harris' leg was heavily wrapped in the aftermath, but he was a limited participant in practice on Wednesday and plans to be on the field as Pittsburgh tries to beat the Patriots for just the second time since 2011.

Asked what happened on the fourth-quarter carry that ended with his left leg being pinned awkwardly underneath him, Harris shrugged.

The injury, whatever it is, does not appear related to the foot issue Harris had at the beginning of training camp.

Coach Mike Tomlin said Harris had his foot stepped on, though Harris later told reporters it was a Lisfranc injury that took about six weeks to heal.

“I mean it’s a little injury,” he said. "I got hurt plenty of times, you know? I mean I had like six, seven weeks to let it calm down — the original injury — and it’s good now there’s nothing wrong with it, man.”

Harris ran for just 23 yards on 10 carries against the Bengals, though he did catch a 2-yard touchdown pass from Mitch Trubisky that gave the Steelers a 17-3 lead.

He declined to say whether he could have returned after getting hurt, saying the decision was out of his hands.

The Steelers managed to end a three-game losing streak to Cincinnati despite an offense that had trouble taking advantage of series of takeaways by the Pittsburgh defense.

The Steelers produced five turnovers, one of them a Pick-6 by safety Minkah Fitzpatrick. Pittsburgh converted two of the other turnovers into a field goal and a touchdown — both in the first half — but did nothing with a pair of takeaways in the second half that could have iced the game.

“We've got to make sure that every time we get the ball from the defense, we got to at least put some points on the board,” Harris said. “And so we need to get better at that.”

NOTES: CB Levi Wallace (ankle) and C Mason Cole (ankle) were both limited on Wednesday. LB Rob Spillane (eye) was a full participant. ... LB T.J. Watt, who is out indefinitely with a left pectoral injury, watched practice from the sideline.