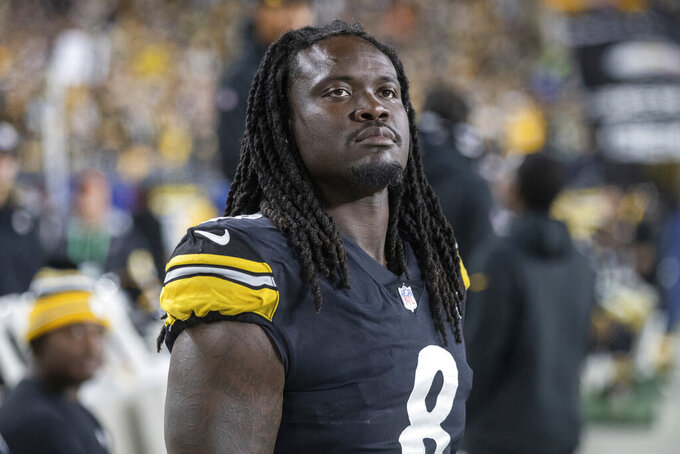 FILE - Pittsburgh Steelers outside linebacker Melvin Ingram (8) looks on during an NFL football game, Sunday, Oct. 17, 2021, in Pittsburgh. The Steelers have traded veteran outside linebacker Melvin Ingram to the Kansas City Chiefs for a sixth-round pick in the 2022 draft. The teams made the announcement Tuesday, Nov. 2, 2021, hours before the NFL's trade deadline.(AP Photo/Matt Durisko, File)

PITTSBURGH (AP) — The Pittsburgh Steelers traded veteran outside linebacker Melvin Ingram to Kansas City on Tuesday for a sixth-round pick in the 2022 draft.

The teams made the announcement a few hours before the NFL's trade deadline.

The move gives Kansas City's struggling defense some much-needed help and gives the 32-year-old Ingram a chance to start over. Ingram signed a one-year contract with the Steelers in July but saw his playing time decrease in recent weeks. He sat out last Sunday's win over Cleveland with what the team called a groin injury amid reports that Ingram was hoping to be traded elsewhere.

"I enjoy working with Melvin,” Steelers coach Mike Tomlin said Tuesday. “It just didn’t work out the way we envisioned, the way he envisioned. And sometimes it happens in free agency.”

Tomlin did not confirm that Ingram asked to be moved, but hinted Ingram had become dissatisfied in recent weeks.

“It’s better to have volunteers as opposed to hostages,” Tomlin said.

Ingram spent the first nine years of his career with the Los Angeles Chargers before joining the Steelers on the eve of training camp. He played a fair amount early in the season while Steelers star T.J. Watt and second-year outside linebacker Alex Highsmith dealt with injuries.

Ingram's snaps declined as October wore on. He was on the field for just 17 plays during a win over Seattle on Oct. 17 before sitting against the Browns.

Charlton did not have a tackle while playing 10 snaps, but impressed Tomlin enough to earn a spot on the 53-man roster Tuesday after Ingram was sent to Kansas City.

The Chiefs (4-4) are tied for last in the AFC West as the season nears the midway point thanks in large part to a defense that is struggling to get stops. Kansas City is 29th in the league in yards allowed and has just 11 sacks through eight games.