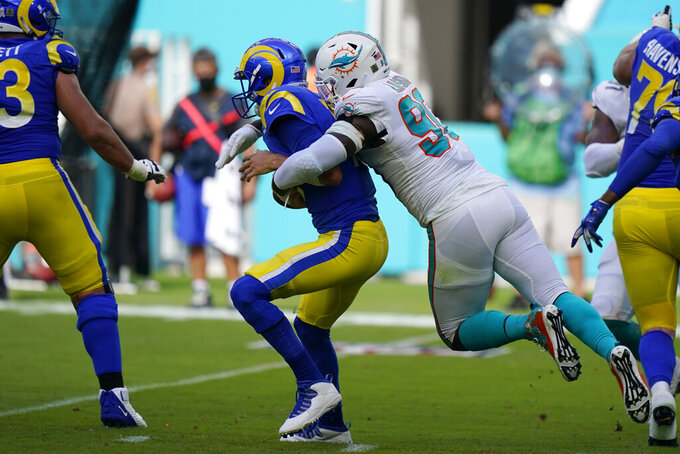 FILE - In this Nov. 1, 2020, file photo, Miami Dolphins defensive end Shaq Lawson (90) sacks Los Angeles Rams quarterback Jared Goff (16), during the first half of an NFL football game, in Miami Gardens, Fla. Twelve months ago, they were 0-7 under first-year coach Brian Flores and allowing 34.0 points a game, and they went on to surrender the most points in franchise history. They've gone from worst to first in the NFL, and are now giving up 18.6 points per game. (AP Photo/Wilfredo Lee, File)

MIAMI (AP) — Christian Wilkins is proud of his hands, and that's not all.

The exuberant 315-pound tackle had a simple explanation for his first career interception, the kind of pivotal play that has become common for the Miami Dolphins' defense.

“It’s all in the hips,” Wilkins said. “I just really had to open my hips and break on the ball. You know what I’m saying?”

What he's saying is the Dolphins have gotten good at getting in the way, which is a big change and a big reason they're 4-3.

Twelve months ago, the Dolphins were 0-7 under first-year coach Brian Flores. They've since gone from worst to first in the NFL in points allowed, and are now giving up 18.6 points per game, compared with 34 at this time in 2019.

The Dolphins have developed a knack for takeaways, too. They're tied for second with 1.9 per game, and totaled four last week — including Wilkins' interception — in a 28-17 victory over the Los Angeles Rams.

Thanks to their dominant D, the Dolphins are above .500 for the first time under Flores and part of the playoff race going into Sunday's game at Arizona (5-2).

Miami has achieved its defensive turnaround without a player who made the Pro Bowl last year, but Wilkins is a star in the making and an anchor in the middle. A 2019 first-round draft pick, Wilkins led all rookie defensive linemen last year with 56 tackles, and he's even better this season. His stat line includes 26 tackles, two takeaways and five passes defended.

“He’s got some athleticism as a defensive tackle, and we try to use him in a variety of ways – stunts, games in the pass rush – and he does a good job really in all areas,” Flores said Wednesday. “He’s somebody who has improved from Year 1 to Year 2. It’s important to him, and he’s got leadership and energy, and he does a lot of good things.”

The defense has steadily improved this year, and in the past three games, the Dolphins have allowed only 34 points. That's their best such stretch since 2014.

“We try not to focus on statistics and worry about what people say about us and where we’re ranked,” safety Bobby McCain said. "It’s about coming out and being better. If you're better than you were last week, then you’re doing pretty damn good.”

“You can’t have a pass rush if you don’t have DBs covering guys,” Van Ginkel said.

Despite Miami's high-wire approach, the secondary never got burned in one-on-one coverage. The Rams' longest gain in 92 plays was 26 yards.

One Rams player said he had never seen a team blitz so much.

“The line, the coordinator, the quarterback — it puts pressure on all of them,” Rowe said. "And the results — tipped balls, we’re getting turnovers, our sacks, and then we’re off the field. Every time we call it, all of us have high confidence.”

Wilkins' confidence extends to his pass-catching skills. He occasionally slips into the offensive lineup in goal-line situations, had a 1-yard touchdown reception as a rookie and wants more.

“I’ve been saying it for a couple years now that I could play a legit receiver in this league or be a legit offensive weapon," he said. “Hopefully coaches and everybody else will start taking me a little more seriously about that.”

“That’s going to be a hard no,” Flores said. "He has been fun to coach, but I don’t really see a pass-catching future for him.”