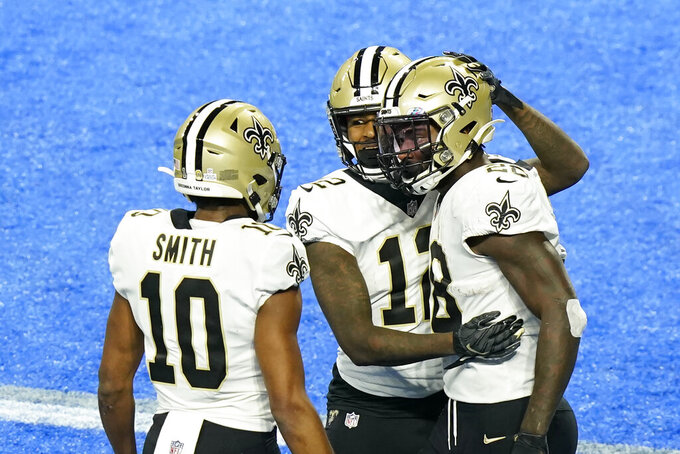 New Orleans Saints running back Latavius Murray, right, is congratulated by teammates wide receivers Marquez Callaway (12) and Tre'Quan Smith (10) after scoring on a 6-yard run during the second half of an NFL football game against the Detroit Lions, Sunday, Oct. 4, 2020, in Detroit. (AP Photo/Carlos Osorio)

NEW ORLEANS (AP) — The NFL and New Orleans Saints are working on contingency plans for Monday night's scheduled game between the Saints and Los Angeles Charges in New Orleans in the event Hurricane Delta brings severe weather to southeastern Louisiana.

“We continue to monitor developments and remain in contact with the two clubs,” NFL spokesman Brian McCarthy said. “We have built-in contingencies for every game in the event circumstances require a change.”

The NFL also had contingency plans in place for recent games played in California because of concerns about how wildfires were affecting air quality. So far, no West Coast games have been moved or rescheduled.

As of Wednesday, forecasts indicated Hurricane Delta would come ashore in Louisiana on Friday as far west as near the Texas-Louisiana border, or as far east as the New Orleans area.

The threat of severe weather already has caused the relocation of No. 17 LSU's game against Missouri on Saturday from Baton Rouge to Columbia, Missouri.

If the game were to be moved, one possibility would be Indianapolis, where the Saints have gone in the past to avoid severe weather. New Orleans did so in 2008 as Gustav approached Louisiana. The Saints held practices in Indiana before returning later to play in their home opener against Tampa Bay in the Superdome as originally scheduled.