Streaking Ravens look forward to 'next challenge' vs. Titans 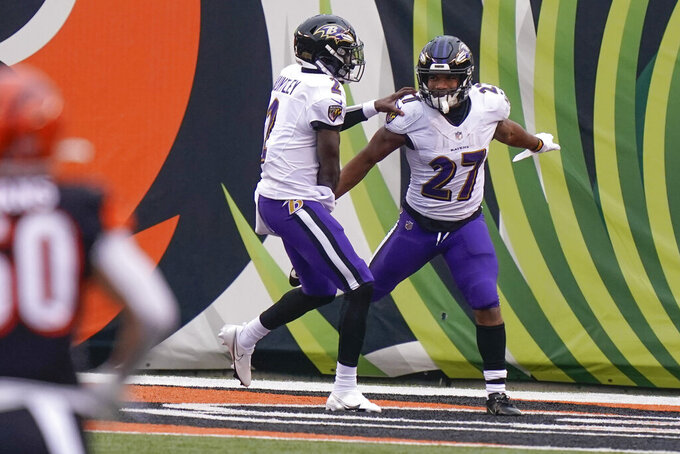 Baltimore Ravens running back J.K. Dobbins (27) celebrates with quarterback Tyler Huntley (2) after scoring a touchdown against the Cincinnati Bengals during the second half of an NFL football game, Sunday, Jan. 3, 2021, in Cincinnati. (AP Photo/Bryan Woolston)

There might come a time when the Baltimore Ravens look back with pride at the late-season surge that got them into the playoffs for the third year in a row.

For now, their scrutiny is on what happens next — with the objective of avoiding the one-and-done pattern that’s thus far defined their postseason with quarterback Lamar Jackson.

Baltimore (11-5) charged into the playoffs Sunday with its fifth straight victory, a 38-3 rout of the Cincinnati Bengals. The Ravens earned a wild-card slot after withstanding a three-game skid, overcoming an outbreak of COVID-19 and shrugging off season-ending injuries to left tackle Ronnie Stanley and tight end Nick Boyle.

Instead of sitting back and admiring the accomplishment, Baltimore instead is looking ahead to a return encounter Sunday with the Tennessee Titans. That's the same team that eliminated the Ravens from the playoffs last season after they earned the top seed in the AFC by finishing with 12 successive wins and a 14-2 record.

The Titans bounced the Ravens from the playoffs last January with a 28-12 blowout in which Derrick Henry ran for 195 yards and threw for a score. In the rematch this season, Henry ran for 133 yards and scored the game-winning touchdown in overtime.

Referring to facing the man he calls “King Henry," Ravens linebacker Matthew Judon said: “It is what it is, you feel me? If we have to go to Tennessee, if we have to go to upstate New York, it doesn’t matter. We just have to win.”

Jackson is looking for his first playoff win after losing to the Los Angeles Chargers in 2018 and falling to the Titans last year. The reigning NFL MVP put up some big numbers against Tennessee in that postseason loss, but Jackson also threw two interceptions and lost a fumble.

Thus, his second straight 1,000-yard rushing season and that five-game winning streak are irrelevant to what happens next.

“It's pretty cool, but we’ve still got things we want to finish," Jackson said. “It’s just the beginning for us, to be honest with you.”

The Ravens rambled for 404 yards rushing against the Bengals, including 160 by rookie J.K. Dobbins on just 13 carries.

Tennessee may have Henry, but Baltimore owns the best running attack in the league and features four backs that can do damage — Dobbins, Jackson, Gus Edwards and Mark Ingram, the not-quite-done-yet veteran who gained 39 yards on nine attempts in Cincinnati.

“We're very blessed to have these guys, these weapons," Harbaugh said. “Those are all guys that can carry the rock for us and make yards."

There's nothing really wrong with Baltimore's run defense, even though the Bengals amassed 147 yards on the ground (55 on one play).

But the Ravens must step up to contain Henry, who ran for 250 yards Sunday in a 41-38 win over Houston. Count on Baltimore defensive coordinator Don Martindale to work overtime this week in an effort to come up with a game plan for putting the clamps on a player who has been unstoppable in his past two starts against the Ravens.

Safety Chuck Clark made his first interception of the season against the Bengals and chipped in with three tackles and an assist.

“Man, it felt good to get one," he said of his fourth-quarter interception at the Cincinnati 4. “I didn’t want to go the regular season with goose eggs."

Judon, the Ravens' franchise player, didn't get a sack and finished with six this season — 3 1/2 fewer than last year and his lowest total since his rookie season of 2016.

He did, however, have a team-high six tackles against the Bengals.

The Ravens had no significant injuries to report after the Cincinnati game and hope to have receiver Willie Snead (ankle), defensive end Yannick Ngakoue (thigh) and punter Sam Koch (reserve/COVID-19 list) back for the Titans.

47 — The number of touchdowns thrown by Jackson in the red zone over his career — without an interception.

This will be Baltimore's first postseason game on the road since 2014, when it lost 35-31 at New England. The last time the Ravens played a playoff game in Tennessee was in 2008, when Matt Stover kicked the game-winning field goal in the final minute.