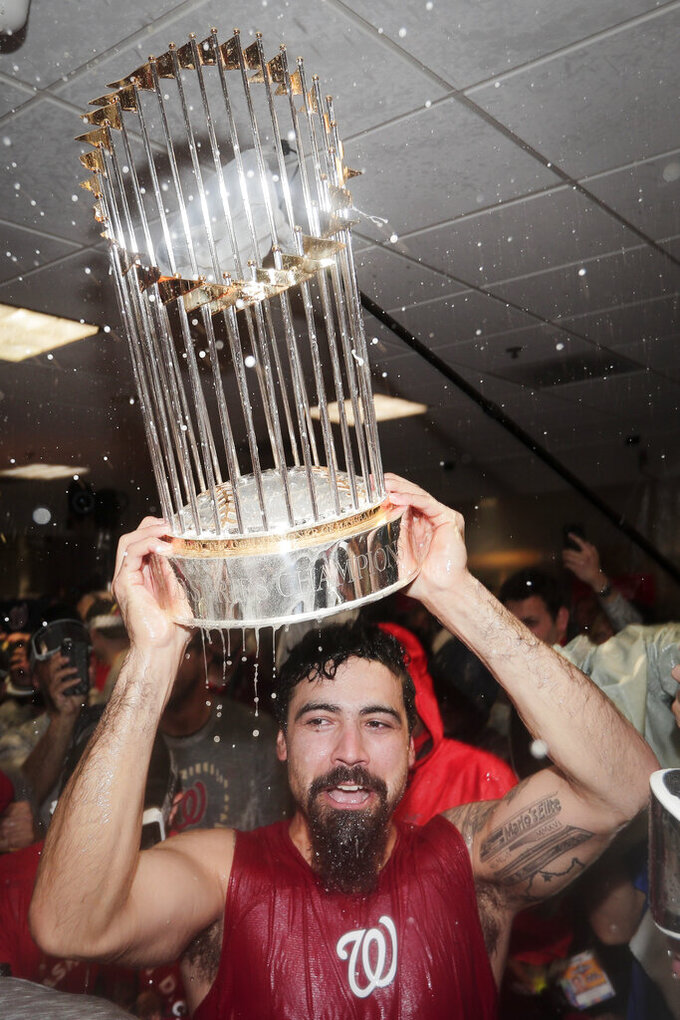 Washington Nationals third baseman Anthony Rendon celebrates with the trophy in the locker room after Game 7 of the baseball World Series against the Houston Astros Wednesday, Oct. 30, 2019, in Houston. The Nationals won 6-2 to win the series. (AP Photo/David J. Phillip)

NEW YORK (AP) — It may be no solace to the Houston Astros, but the Washington Nationals' comeback win in the World Series helped baseball avoid a dubious record.

The series' seventh and deciding game reached 23.2 million people, eclipsing even "Sunday Night Football" and enabling the Series to average just under 14 million viewers per game, the Nielsen company said. The last game drew nearly 7 million more viewers than any of the other games.

Through five games, the series was on pace to be the least-watched Fall Classic ever.

At least for another year, San Francisco's four-game sweep of Detroit in 2012 keeps the record of least popular series ever. It averaged 12.66 million viewers.

Showtime did not immediately have ratings for the series finale of "The Affair" on Sunday but said the episode had the best-ever numbers of the five-year series in streaming and on-demand platforms.

Fox News Channel was the week's most popular cable network, averaging 2.6 million viewers in prime time. ESPN had 2.3 million, MSNBC had 1.77 million, Hallmark had 1.51 million and TLC had 1.12 million.

ABC's "World News Tonight" topped the evening newscasts with an average of 8.7 million viewers. NBC's "Nightly News" was second with 7.9 million, and the "CBS Evening News" had 5.6 million viewers.

ABC is owned by The Walt Disney Co. CBS is owned by CBS Corp. CW is a joint venture of Warner Bros. Entertainment and CBS Corp. Fox is owned by Fox Corp. NBC and Telemundo are owned by Comcast Corp. ION Television is owned by ION Media Networks.