Struggling Rams aim to get back on track against Cardinals 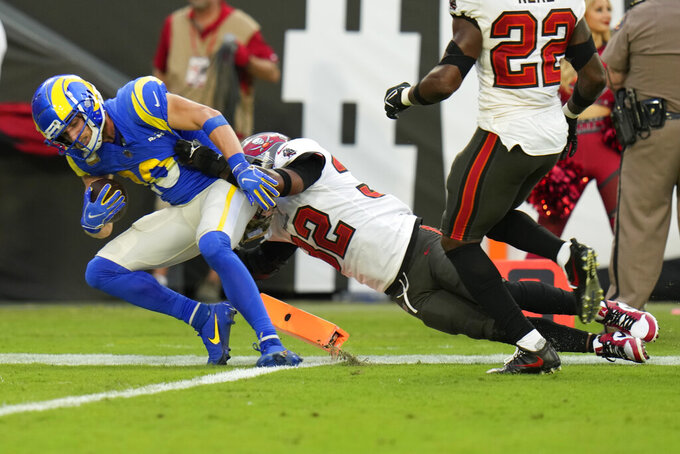 CARDINALS PLAYER TO WATCH: LB Zaven Collins is the team’s second-leading tackler in his second season. After an uneven rookie season, Collins has been much better in Year 2, anchoring the middle of the defense. He had a 30-yard interception return for a touchdown that briefly gave the Cardinals a 14-10 lead in last week’s loss to the Seahawks.

RAMS PLAYER TO WATCH: WR Cooper Kupp. Where would Los Angeles be without its offensive playmaker? Kupp had 128 of the Rams’ 206 yards in the loss at Tampa Bay, catching his sixth touchdown reception of the year. With Matthew Stafford in concussion protocol, coach Sean McVay will have to find ways to keep Kupp involved regardless of who plays QB.

KEY MATCHUP: Cardinals QB Kyler Murray vs. Rams DT Aaron Donald. Considering its uncertainty at the most important position, Los Angeles must get superstar performances from its best players to stay in the thick of the playoff race. Donald has demonstrated a remarkable knack for making the critical plays in the biggest moments, and he will have to be at his best to pressure Murray. Donald has 6 1/2 sacks against Murray. Murray has struggled against Donald and the Rams, holding a 1-6 record in the regular season. He has never rushed for more than 61 yards against Los Angeles, so unlocking his mobility might be needed to reversing those struggles.

KEY INJURIES: Cardinals coach Kliff Kingsbury said Murray (hamstring) and starting S Budda Baker (ankle) will be game-time decisions. Colt McCoy would start if Murray cannot play. Baker surprisingly returned to practice Friday after Kingsbury said earlier in the week he would be out this week. ... Arizona is down three starting offensive lineman. LG Justin Pugh (knee) is out for the season, C Rodney Hudson (knee) has missed the past several weeks and RG Will Hernandez (chest) was put on IR earlier this week with a chest injury. ... Stafford entered concussion protocol on Wednesday. He is listed as questionable, and McVay said the Rams would wait until inactives are announced 90 minutes before the game Sunday before deciding on Stafford's availability. If he can't play, John Wolford would likely make his second career regular-season start; he was 22 of 38 passing for 231 yards and one interception in a Week 17 win against Arizona to clinch a playoff berth in the 2020 season. ... C Brian Allen (knee) and LT Alaric Jackson (knee) missed practice time but should be able to go Sunday. ... DT Greg Gaines is not expected to play because of an elbow injury.

SERIES NOTES: The Rams have won three straight against the Cardinals, including a 34-11 drubbing in the wild-card round to start their drive to the Super Bowl. ... Arizona snapped a seven-game losing streak in the series with a 37-20 win at SoFi Stadium in Week 4 last season. ... Under McVay, the Rams have scored 20 or more points in 10 of 11 games against the Cardinals.

STATS AND STUFF: The Cardinals have a 10-3 record over their past 13 road games. ... Arizona’s defense has returned four touchdowns over the past four games, including three interception returns and one fumble recovery. ... The Cardinals will start their seventh different offensive line combination on Sunday after Hernandez was put on IR. ... Cardinals TE Zach Ertz has 46 receptions this season, which ranks second in the NFL for a TE behind Kansas City’s Travis Kelce, who has 57. ... WR DeAndre Hopkins has caught a pass in 139 consecutive games, which is the longest active streak in the league. ... The Cardinals have a 4-11 record, including the playoffs, since starting last season with a 10-2 mark. ... The Rams scored at least 20 points in all but two games during Stafford’s first season with the team, but they have done it just three times in eight games this season. ... McVay is 50-3 when leading at halftime, having failed to protect leads in each of the past two weeks against San Francisco and Tampa Bay. ... The Rams are allowing 4.08 yards per carry, fifth fewest in the NFL. The defense gave up a season-low 51 yards rushing against the Buccaneers. ... Donald has five tackles for loss and four sacks in his past two regular-season games versus Arizona. He has multiple tackles for loss in seven of 17 games against the Cardinals. ... LB Bobby Wagner had a season-high 13 tackles last week. In 19 games against Arizona, he has amassed double-digit stops nine times. ... DB Jalen Ramsey does not have an interception in six games against Arizona, but he has eight pass defenses and four tackles for loss.

FANTASY TIP: Kupp and Hopkins shape up to be the best fantasy options in what should be an offensively challenged game simply because of volume. Hopkins has been targeted 32 times in three games since making his season debut, making 26 grabs, while Kupp is averaging 10.1 touches per game.